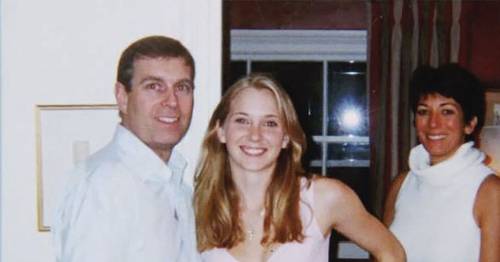 Prince Andrew made ‘snickering noises’ while having sex with Virginia Giuffre, she says

Prince Andrew allegedly made "snickering noises" as he had sex with a teenaged Virginia Giuffre, she claims.

The former sex slave alleges the sounds came from the Duke of York during what she says was her second encounter with him at Jeffrey Epstein 's office in New York.

The prince was said to be playing with a puppet of himself from the TV show Spitting Image when Ms Giuffre sat on him.

She alleges he then moved his hand, which was inside the puppet, onto her breast, sparking laughter within the room.

Describing how she went upstairs to the massage room with Andrew, she said: "He couldn't have cared less about me as a young woman.

"He was being treated to sex for which someone else was paying.

"From the snickering noises he was making, he was really enjoying the whole thing but I felt like a total prostitute."

The Duke of York has consistently denied the allegations
(

Prince Andrew settled Ms Giuffre's civil claim of sexual abuse for an unconfirmed sum said to be in the region of £12million.

He has consistently denied her allegations, telling Newsnight in 2019 he had no recollection of ever meeting her despite an infamous photo of the two together with Maxwell in 2001.

In a post settlement statement, which contained no admission of liability from Andrew, it was accepted Ms Giuffre was a 'victim of abuse' and that he regretted his association with Epstein.

The Duke of York vowed to make a "substantial donation" to Ms Giuffre's charity, which supports victims' rights, and in his statement he praised her "bravery" and insisted he "never intended to malign" her "character."

Ms Giuffre alleged in a US civil claim that she was forced by Epstein and Maxwell to have sex with the Duke of York on three occasions after being trafficked by the pair.

Andrew has always denied Ms Giuffre’s claims and settled the case without any admission of wrongdoing.

Ms Giuffre was expected to wait before speaking out in an apparent attempt to limit damage to the Royal Family during the Queen's Platinum Jubilee celebrations, The Times reported.

One lawyer not involved in the case suspected the settlement would allow Ms Giuffre to write a book about her side of the story.

Mitchell Epner, a former federal prosecutor who is an attorney with the New York firm Rottenberg Lipman Rich, told The Times: "Ordinarily, you would have a complete non-disclosure [agreement] on both sides."

He also said that in this case, “since it’s a settlement in the context of, on its face, an apology from Prince Andrew", he suspects Ms Giuffre “has agreed not to say anything [but] she will be in a position to write a book, probably for this Christmas season”.

Previous : Killer who beat man to death at kebab shop sent back to jail after BARKING at barmaid
Next : Charity begs Brits to stop buying bulldogs after ‘worst ever’ intake of sick pooches