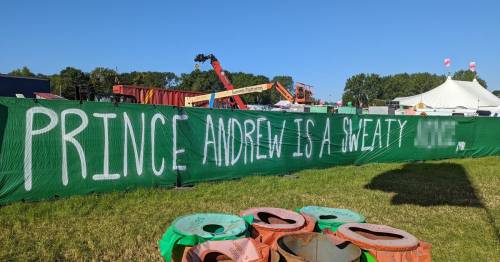 Prince Andrew graffiti has appeared at Glastonbury which has blasted the 'sweaty' Duke.

The Duke of York, 62, was recognised by festival goers as revellers sprayed a message on day one of the music festival kicking off.

This year's festival, which will be headlined by Billie Eilish on the main Pyramid Stage on Friday night, saw a picture uploaded to twitter with the caption: 'They've gone early this year #Glastonbury2022'.

Social media users responded to the Tweet by replying with similar pictures across the country of messages accusing the Prince of being 'sweaty'.

One user responded: "Best place on earth" and another added: "Nice to see the good folk at Glastonbury are ready to welcome Prince Andrew back into public life."

Some users were less than impressed as one user wrote: "That's very, very, rude and disrespectful. He's a Royal you know."

The message is in reference to his 2019 car crash BBC Newsnight interview with Emily Maitlis when the The Duke of York claimed he had a condition which was brought on by a traumatic event he experienced during the 1982 Falklands War.

During that time he served as a Royal Navy helicopter pilot and used the condition to deny claims from Virginia Giuffre, who claims she was sexually assaulted by the The Duke of York, which he has consistently denied.

The Prince told the BBC in the interview about his reported condition: "There's a slight problem with the sweating because I have a peculiar medical condition which is that I don't sweat or I didn't sweat at the time.

"Yes, I didn't sweat at the time because I had suffered what I would describe as an overdose of adrenalin in the Falklands War when I was shot at, and I simply . . . it was almost impossible for me to sweat."

The rare condition he referred to is called anhidrosis, which is the inability to sweat and is normally inherited.

However, it can be caused by physical skin damage and drugs such as morphine and for people who suffer from anhidrosis means they cannot sweat at all.

Earlier this year Andrew paid a settlement with Ms Giuffre which is believed to be around £12million.

As part of the settlement Andrew did not accept guilt.

Previous : Man wakes to find he’s lost three generations of family including baby in crash – World News
Next : Barefoot teen ‘begging for his life’ chased around Lidl by knife-wielding thugs