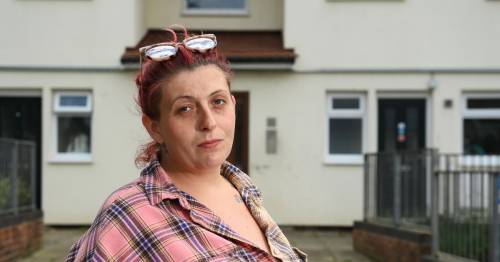 A pregnant mum living in council housing says a bed bug infestation in her home is so bad that she woke up one morning with a "track of bites" along her baby bump.

Shelley Bedford, a Plymouth local who is 32 weeks pregnant, wants Plymouth Community Homes to “take responsibility” for leaving her family in 'awful' conditions for months on end, Plymouth Live reports.

Shelley is not the only family that has been affected by pest control issues. At least seven other properties in the block have been 'riddled' with bed bugs for nine weeks and people have been suffering bites – including a three-year-old.

Shelley, 29, said she was told by a Plymouth Community Homes officer that the bed bugs had spread through the building due to another tenant in the block having pest control issues for almost a year.

But it wasn’t until two weeks after reporting the issue that PCH actually sent a pest control specialist to review the homes affected on May 13.

She and other residents have had to wait a month since this inspection for any action to be taken to get rid of the bed bugs.

Despite doing everything she could – like hoovering and washing linen and clothes – the bed bugs have "multiplied". Shelley said the issue has forced her family to sleep in their living room on an air bed for at least five weeks.

Steve Ford, who is the Head of Neighbourhoods at Plymouth Community Homes said they are aware of the pest control problems experienced by residents. He thanked the residents for their 'patience' while they ensured their homes were being successfully treated.

Plymouth Community Homes said they have now installed a mobile laundry facility for the residents affected by the bed bug infestation. Heat and insecticide spray treatments have been carried out.

“Nine weeks ago, we found out there was an infestation of bed bugs in the block. We were told that PCH would deal with the issue,” she said.

“They had a bed bug pest control inspector come out two weeks after finding out about them, who said ‘it was the worst case of bed bugs he had seen in his thirty years of his career. It was May 13 when we had the specialist come in, so from then to now, that’s how long we’ve been waiting for the bed bug treatment.

“Bearing in mind I have not even slept in our bedroom for five to six weeks as we have been on a blow-up bed in the front room with our 15-month year old- and I’m 32 weeks pregnant. My mood has been up and down, my medication has been upped. The kids have been going to school playing up because of lack of sleep, waking up itching and finding bugs on them.

“It doesn’t matter how much we are washing and hoovering our belongings, and doing everything we can, it’s not getting better- it’s getting worse."

Cain Hodge pictured with his nephew and mum Claire Hodge
(

Shelley explained that having the pest control issue in her home has "broken" her and has left her feeling tired. Also after falling asleep one evening she said she woke up with a "track of bites" along her baby bump.

She continued: "The bed bugs get so big. They have grown and multiplied in the time it’s taken for them to sort out the problem. I took a sheet out of the drawers out of my bedroom and put it on the blow-up bed in the front room, and woke up pickled in bites.

"People have said ‘not to say anything because I have got what I wanted’ but it’s not about getting what I wanted, it’s the fact I shouldn’t have been treated like this in the first place. She added: "Plymouth Community Homes need to take responsibility.”

Another resident who spoke to PlymouthLive about the impact of the bed bug infestation was Clair, 43, who said it's been "horrible" for her family. She explained how no matter where you are in the home, you are constantly on edge or being bitten. This included her three-year-old grand-daughter, who has bites all over her back.

Clair said: “You can sit anywhere in your house because you are constantly getting bit. Our family gets bitten a lot. It’s just horrible.

“You're going to bed and you're itching all of the time because you can feel them crawling over you. Then I’m having to wake up trying to squish them just to get a decent night's sleep. It’s awful.”

“I have cleared out all my drawers and there was hundreds of shedded skin where they’ve been. Guaranteed every night there is a bed bug somewhere.”

When Plymouth Live visited Shelley, Clair and their families this week, they had been told they were not allowed to enter their homes during the heat and insecticide spray treatments. Residents getting their homes treated were offered a place to stay during the day at Devonport Live cafe.

Also before the pest control specialist attended their homes, they were asked to remove all clothing and soft furnishings and had to have them washed at a 60 degree heat before returning it to their homes. Plymouth Community Homes said they installed a mobile laundry facility for the residents affected by the bed bug infestation where Shelley said there were two washing machines and two tumble dryers.

Explaining the actions that they had taken, Mr Ford said that they were working to find a solution. He added he wanted to thank everyone for their patience

Steve said: “We were made aware of pest control problems being experienced by some of our residents living in Clowance Street. While these issues fell outside of our pest policy responsibilities, the team at Plymouth Community Homes appreciated how distressing the situation was for residents, and given the issue, wanted to provide further support.

“Our housing officers organised for a specialist pest control contractor to visit homes requiring treatment, and we have since formed and initiated an action plan to tackle the problem.

“Heat treatments and insecticide spray treatments have taken place in some homes, and monitors are being installed to ensure the situation is managed moving forward. We have also installed a mobile laundry facility for residents to use so bedding, clothes and soft furnishings can be washed and dried.

"“We have been in constant contact with the residents whose homes have been affected to support, advise, and keep them updated about the tailored treatment plan, which is bespoke to each address, and we’re confident this will provide a solution."

“We want to thank our residents for their patience while we do our utmost to support them and ensure their homes are successfully treated.”

Previous : Boy, 9, dies in scrambler bike crash with 13-year-old in critical condition
Next : Five second test that tells you if it’s too hot to walk your dog