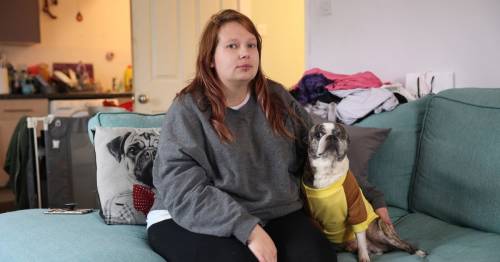 A pregnant mum has been left stranded in her second-floor flat ever since the building's lift broke in October last year.

Jasmine Johnson, who lives in Grange Court, Southwick in West Sussex, has to carry her disabled daughter, who is five, down four flights of stairs whenever she needs to go out.

And Ms Johnson, 29, said it will get even harder after she has her baby, which is due in around eight weeks, reports Sussex Live.

"I feel like I’ve been stuck in my home for three months," Ms Johnson said.

Jasmine, along with 90-year-old Terry Healey, expressed their disgust at Adur District Council back in November after the Grange Court lift had not been fixed for four weeks.

Although the lift was eventually fixed a few days later, the call button remains broken on the second floor which means Jasmine has been unable to use it

She told SussexLive: "I can’t call the lift down so I can’t get the wheelchair out.

"I’m expecting in eight weeks so the baby could come at any time.

"I felt like I’m stuck in my home ever since the lift first broke three months ago.

"This has made me really anxious, I could go into labour right now."

As a result of complaints surrounding the lift, along with mould and cramped living conditions, numerous Grange Court residents claim they were told by a housing officer that their homes are unsuitable to live in.

Therefore, they would be made a priority to bid for new homes.

However, when the residents found on the housing system that they had not been made a priority for bidding, a council representative said they had misunderstood what was said.

Many feel they are being "fobbed off" by Adur District Council, who are trying to "back down" from what they offered.

Jasmine, who is among these select residents, says the council has given her "false hope".

She continued: "They promised us that these properties were going to be on there

"After trying to contact the housing officer for weeks, I finally got through to the person above them.

"The council said they could give me a management transfer, but this means I could be rehomed in any area and wouldn’t be able to turn it down.

"This is not suitable for me a still have to get my daughter to school, and I need to be near my parents in Shoreham.

"My dad has been in intensive care for a month and is due to come home soon.

"I can’t just be plopped anywhere because I don’t drive.

"I’ve just been given false hope as they said I would be moved within six months."

A spokesperson for Adur District Council said: "Adur Homes has been in touch with residents living in Grange Court to provide the relevant help and support.

"Residents are not being moved out of their properties but have been advised that their housing needs will be reassessed where appropriate."