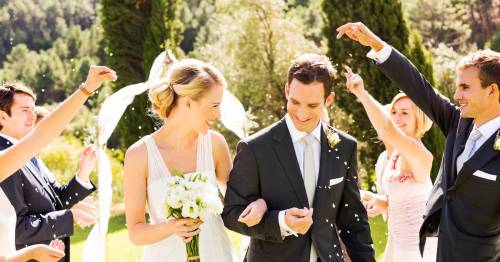 Pre-wedding pings: Government says you must stop the wedding and self-isolate

Couples getting married may need a back-up date as officials have said they will need to self-isolate if they're pinged on the eve of their wedding day.

On Monday all legal restrictions on wedding ceremonies including social distancing, face coverings, guest numbers and table service were scrapped.

Official guidance no longer instructs but advises people to self-isolate if they test positive for coronavirus or had been in close contact of someone who tested positive and were pinged by the NHS Test and Trace app.

Boris Johnson confirmed the move from requirements to guidance on Freedom Day with his message promoting “personal responsibility” and while urging people to make “informed choices”.

But the Prime Minister's official spokesperson appeared to say deciding not to quarantine on your Wedding Day would be going against the rules – instead of the decision being one's "informed choice".

Vicky Atkins, the Home Office minister sparked the discussion when asked on LBC what a couple could do if they were "pinged the night before my wedding".

Ms Atkins said: "Oh gosh. The guidance is 'please, you must stay at home'. That is a terribly, terribly difficult scenario."

The Prime Minister's official spokesman added: "Yes we recognise that would be a difficult situation for anyone, but the app is carrying out an important function.

"One in three people contacted either by Test and Trace or the app go on to develop coronavirus. That demonstrates the importance of isolating people when asked to do so."

On Monday, Boris Johnson resisted calls for a more wide-reaching change to quarantine rules to reduce the number of people in isolation
(

On the same day, speaking virtually from Chequers at Prime Minister's Questions, the PM said: "He urged people to follow the rules until August 16 when the country shifts to "a system based on contact testing, rather than contact isolation."

"Until then, I must remind everybody that isolation is a vital tool in our defence against the disease," he added.

This apparent change in messaging comes a day after Downing Street contradicted Business Minister Paul Scully on whether to quarntine.

Numer 10 said it is “crucial” for people to self-isolate after receiving an alert from the NHS Covid-19 app, contradicting a minister who suggested people could make an “informed decision” on whether to quarantine.

Mr Scully had said earlier that it was a decision for individuals and employers whether they should isolate after a “ping” from the app.

Today Sir Keir Starmer has entered self-isolation for the fourth time since the pandemic began.

He joins the PM and Chancellor Rishi Sunak who have ben quarantining since having contact with Health Secretary Sajid Javid who tested positive for covid on Saturday.