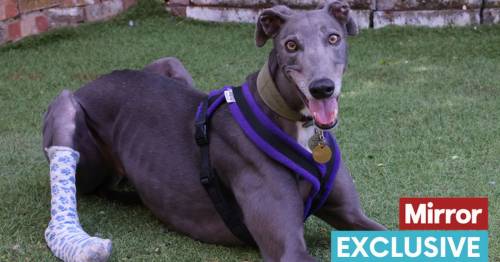 Poorly greyhound needs £7,000 medical help after breaking every bone in his paw

An animal charity is trying to raise £7,000 for an unlucky greyhound who broke every bone in his paw days after being adopted.

Three-year-old Patch was seriously injured after falling down “a hole or dip in the ground” while out for a walk.

His new owners could not afford the £7,000 vet bill to save Patch’s leg – so handed him back to Kent Greyhound Rescue.

Patch, who had already been returned to the rescue once, was moved into a temporary foster home to help him recover from the emergency surgery needed.

But despite having two metal plates inserted into his back right paw, vets fear Patch may still need to have his leg amputated.

Emma Bartlett, 39, who has been looking after Patch since his op, said the dog’s X-rays were “disturbing”.

The mum of three, from Maidstone, Kent, said: “He’s got a splint so he’s not allowed out for walks.

“We have to take him out in the garden on a lead so he can use the toilet, but that’s about it. It’ll be that way for six weeks.”

Emma, who volunteers for KGR, said Patch’s injury was one of the worst the rescue had seen.

She said: “It is not very common [for dogs to break bones in their feet].

“He had been with his new owners for only a couple of weeks. All we knowis that he was in a secure field, had been let off the lead and had fallen.

“We understand he got his foot caught down a hole or a dip and ended up breaking every bone in it.

“There are slow signs of a recovery now but it will affect him, and may affect his confidence.”

Patch is spending most of his time confined to a cage while he recovers.

Patch shattered his paw whilst out running
(

Fellow volunteer Hannah Wilson said: “Patch is a young dog and KGR believes every effort should be made to help get him back on his feet and find a long-term loving home.”

Hannah, who fostered Patch prior to his most recent adoption, has set up aGoFundMe page in a bid to cover Patch’s vet bill.

She said: “We would be incredibly grateful if you could offer any support.

“KGR completely relies on donations and the charity could not exist without your help.”