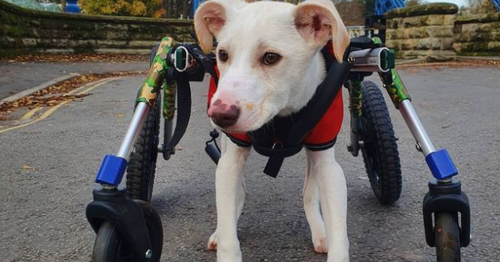 A dog rescued from death row in Dubai is now living his best life – despite the fact he can’t walk.

Ralphie was discovered living on the streets of Dubai with two of his siblings, but he was the only one unable to stand – as a result, vets were preparing to put him to sleep.

He was rescued by the Angels for Animals Foundation and brought over to the UK on the next available flight before being adopted by Gemma and Lisa, in West Yorkshire.

Gemma said: “When we saw Ralphie up for adoption we didn't even need to say anything to each other. We just looked at each other and we knew we were going to apply for him.

“He’d been adoptable for two months – I knew I didn’t need to ask Lisa. I just filled in the application form and sent it off.” 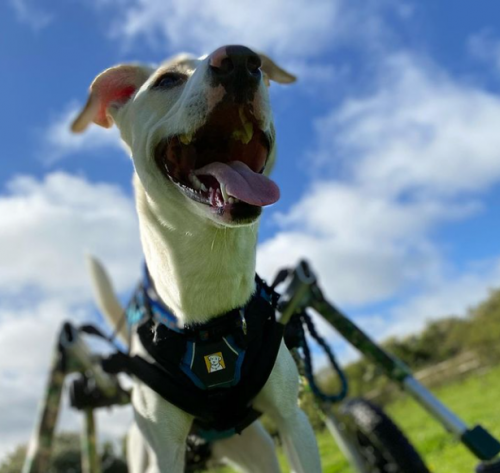 The couple knew they’d be able to care for Ralphie’s additional needs, as their late dog Yogi, who passed away nearly a year earlier, was blind and diabetic.

Gemma added: “We always knew we were able to look after a dog with special needs, and we just fell completely in love with him when we saw his picture.”

Ralphie – who has cerebellar hypoplasia – went to live with Gemma and Lisa, as well as their collie cross cocker spaniel Lottie in January.

The one-year-old pooch can only walk three steps before falling over, which is how he earned his Instagram username ‘Ralphie the rocky dog’. But Gemma and Lisa don’t let his condition stop him from living his best life.

Gemma said: “Ralphie is getting stronger and stronger and can walk if we hold his harness to support his weight. He has a set of wheels and also we bought him a canine sport rucksack because we love longer walks and he just loves watching the world.

“To us Ralphie is perfect and we just adapt whatever we need to do for him. When we first got him, Lottie couldn’t understand why he wouldn’t get up and play, but now she gets on the floor and plays with him. Or she’ll pull his bed closer to where she wants him – it’s like she’s got a sixth sense.” 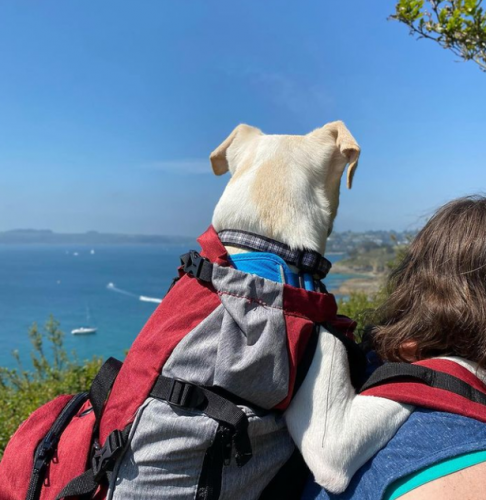 But the couple have had some horrific comments made about Ralphie, saying the dog should be put to sleep.

Gemma said: “If a person has something wrong with them, you don’t put them to sleep for having a disability. His cerebral fluid hasn’t developed properly which affects his motor skills, but other than that he’s a healthy dog. To think he wouldn’t be here is horrendous for us.

“Whilst we were on holiday in Cornwall and Ralphie was in his rucksack a more mature lady told us that there was no point in having a dog that couldn’t walk and we told her that he lived a happy life and his brain only effected his motor skills and she again replied he should be put to sleep.

“He’s our Ralphie and he’s living his best life. To think he wouldn't experience the beach or his adventures – nothing stops him and he might not be able to do things on his own but that’s where we come in.”

Previous : Writer of Prince Harry’s memoir has history of exposing father-son relationships
Next : Pat McCormack on Tokyo boxing mission and only an Olympic gold medal will do