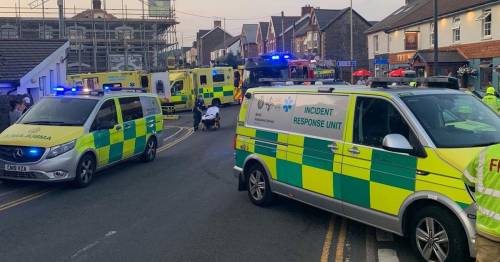 Pontyclun crash: ‘Carnage’ as lorry ploughs into ‘a number of pedestrians’ outside pub

A lorry has crashed into a 'number of pedestrians' outside a pub in Pontyclun, Wales.

Photographs from the scene show a huge emergency services response as at least five ambulance vehicles attended the scene near the Windsor Pub alongside the air ambulance, police and fire service.

A witness reported hearing a "massive crash" before seeing the area 'littered with people who looked badly injured'.

The scene was described as "carnage" as people were 'running around trying to help'.

South Wales Police told Wales Online: "Emergency services are at the scene of a serious road traffic collision on Llantrisant Road in Pontyclun near the Windsor pub.

"A lorry has been in collision with a number of pedestrians.

"The public is advised to avoid the area while the matter is being dealt with."

A pub customer has described the terrifying scene saying: "It was horrific. The pub had four or five tables outside the front and was busy with people having drinks in the nice weather.

"I walked through to the back beer garden to wait while someone ordered drinks and there was a massive crash. It sounded like somebody had dropped a load of beer glasses.

"I walked into the pub and someone was on the phone to 999 and I could heard them saying they needed more than one ambulance.

"I went outside to see what was going on and it was just littered with people – there were several, maybe five, who looked badly injured. And many more who were sitting up with cuts.

"The pub came alive and people were running around trying to help, looking for towels and pillows. It was carnage.

"I’ve only seen stuff like that on the news. I thought it just can’t be happening."

South Wales Ambulance service have said that the incident is still ongoing.

They have yet to confirm whether anybody has received hospital treatment as a result of the incident or the extent of any injuries sustained.

The owner of The Windsor Hotel, near where the incident happened, has posted an update on social media.

They said: "Hiya all. I have had a few messages in regards to the situation tonight. Everyone has been taken to hospital and the emergency services are on the case.

"Thank you all for your help. Thanks to all by standers who helped and all the emergency services."

An eyewitness said that Llantrisant Road – the A4222 – where the pub is located is blocked off from the turning to Miskin and Pontyclun.

A police cordon is in place near the post office on the main road.

The A4222 Cowbridge Road remains closed in both directions between Clun Avenue and Llanharry Road, according to INRIX traffic monitoring system.

The incident is affecting traffic through the centre of PontyClun

Previous : State actors could use blackmail, threats to influence voters, politicians in the next election, CSIS warns
Next : Staycation chaos to grind roads to gridlock as millions head off on summer hols