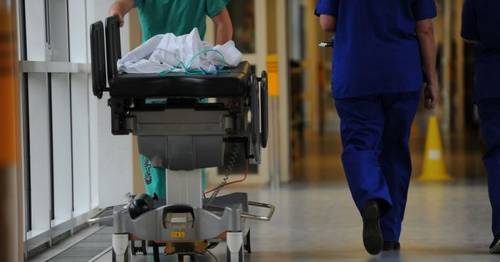 Polio will paralyse unvaccinated child if allowed to spread in UK, expert warns

People infected with polio in the UK are probably oblivious to it – but if allowed to spread it could eventually reach an unvaccinated child, an expert has warned.

Health chiefs are scrambling to identify where the poliovirus is circulating, with the UK Health Security Agency (UKHSA) today declaring a 'national incident' after it was detected in sewage works in London.

The samples were found at the London Beckton Sewage Works, which serves four million people in the capital.

Officials are desperately trying to narrow down the area where the virus – which can cause paralysis – is spreading.

This afternoon Nicholas Grassly, Professor of Vaccine Epidemiology at Imperial College London, told The Mirror that it is crucial the virus doesn't take root.

Samples of the virus have been detected at the Beckton Sewage Treatment Works in London, which serves around four million people
(

He said: "Only one in a few hundred people are paralysed by polio, even in the unvaccinated population.

"So far there haven't been any cases of paralysis reported, but if the virus spreads it will eventually cause paralysis in an unvaccinated child.

"The priority now is to identify where it is."

Prof Grassly said at the moment officials have "no idea" how many people currently have the virus.

It has been detected in sewage several times since February, but Prof Grassly said he believes today's announcement was made because experts are now confident it is spreading.

The last community outbreak in Britain was in the 1970s but health officials insist the current risk to the population is low.

"What we can see from the sewage is that it's been detected on multiple occasions and there's genetic diversity, which suggests there's been local circulation."

He continued: "Hopefully this is something that disappears, but there's a risk that it could spread further.

"We don't want it to reach children who are unvaccinated. Whilst it's not too worrying at this stage, it's of sufficient enough concern for the UKHSA to do this briefing."

Dr Kathleen O’Reilly, Associate Professor in Statistics for Infectious Disease and expert in Polio Eradication, said that detection in sewage had helped prevent the virus spreading in Israel.

Dr O'Reilly said: "These findings suggest that there may be localised spread of poliovirus, most likely within individuals that are not up to date with polio immunisations."

She continued: “The findings are from sewage sampling, as people infected with poliovirus shed virus in their faeces, which can then be detected in sewage treatment plants.

"Sewage surveillance for polio, and other pathogens, have been extremely useful to detect emergence of pathogens and respond to these detections early, preventing disease and onward spread. The surveillance in London that identified vaccine-derived poliovirus is such an example.

"Another example is from Israel in 2014 where poliovirus was also detected in sewage samples, and polio cases were prevented through vaccination."

Oral vaccines against polio offered abroad contain an “attenuated” form of the virus – weakened in a laboratory so it cannot cause disease.

These vaccine-derived forms of the virus remain in stool and are occasionally picked up in routine UK testing of sewage samples, which are conducted in London and Glasgow.

The oral vaccines are different to the polio injections offered in the UK which contain a completely inactivated form of the virus.

"The virus results from a mutation of the Sabin virus that is a live virus used to vaccinate against polio, and it causes paralysis in some, though the majority of infections are asymptomatic.

“Sabin-virus based vaccine (live oral polio vaccine) is now only being used in countries that are in the active eradication phase of polio eradication – other countries have switched to inactivated polio virus vaccine that cannot mutate.

“The fact that it has been found in sewage in the UK attests to the strength of the surveillance programmes of UKHSA.

"Its presence in the sewage reminds us that polio eradication has not yet been completed in the world. The high vaccination coverage using inactivated polio vaccine in the UK will limit the spread of vaccine derived polio and protect those who have been vaccinated against polio paralysis.”

It has prompted calls to make sure people – particularly children – have been vaccinated for polio.

Dr David Elliman, consultant paediatrician at Great Ormond Street Hospital, said: “Parents sometimes ask why, when diseases are uncommon in UK, or in the case of polio has been eliminated, do we continue to vaccinate against them.

"The answer is that, although we are an island, we are not isolated from the rest of the world, which means diseases could be brought in from abroad.

"The finding of vaccine derived polio virus in sewage proves the point. Although the uptake of polio vaccines is high in UK, there are children who are unimmunised and therefore at risk of developing polio if in contact with this virus.

"The risk is small, but it is easily preventable by the vaccine, which in the UK is killed and so cannot cause the disease. There is no upper age limit for the vaccine. Anyone who is not fully vaccinated against polio should seek advice from their health visitor or general practice."

The risk of transmission throughout the community is currently being established.

Polio is an infectious disease caused by a virus that can spread from person to person and cause paralysis.

Early symptoms of polio in children and adults

According to the NHS, early warning signs may include:

How polio is spread

The recent outbreak in London is said to be caused by a person returning to the UK after having the oral polio vaccine.

It remains unclear how much the virus has spread, however, it may be confined to a single household or an extended family.

Polio is spread when the stool (poo) of an infected person comes into contact with the mouth of another person, either through contaminated water or through food.

Another way of spreading polio is through oral-to-oral transmission by an infected person’s saliva.

The potentially deadly disease can be prevented with a vaccine.

“Investigation [is] underway to protect public, who are urged to ensure polio vaccines are up to date, especially parents of young children who may have missed an immunisation opportunity,” says the UK Health Security Agency.

“Vaccine-derived poliovirus has the potential to spread, particularly in communities where vaccine uptake is lower,” said Dr Vanessa Saliba, consultant epidemiologist at the UKHSA.

She added: “On rare occasions it can cause paralysis in people who are not fully vaccinated, so if you or your child are not up to date with your polio vaccinations it’s important you contact your GP to catch up, or if unsure check your red book.

“Most of the UK population will be protected from vaccination in childhood, but in some communities with low vaccine coverage, individuals may remain at risk.”

Parents of children who are not up to date with their polio vaccine course are urged to make an appointment with their GP as soon as possible.

The UKHSA added that the risk to the wider population is low.

Previous : Creepy man approaching schoolchildren and asking them ‘do you want to come with me?’
Next : Killer got mum, 70, to help dispose of victim’s body by setting it on fire in bushes