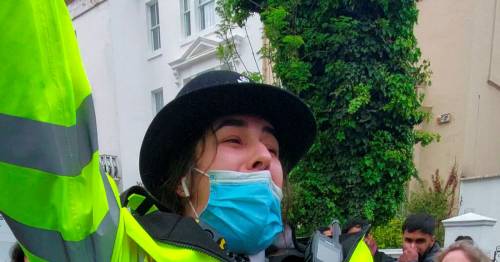 A police officer is being investigated after being recorded shouting "Free Palestine" to loud cheers at a protest in central London.

The clip, which has been widely shared on social media, shows the female officer hugging a demonstrator on Saturday before raising a fist and chanting.

The Metropolitan Police said it is reviewing the footage and weighing up whether to take any action.

A female protester was shown stopping and trying to convince the officer – who said she was originally from Iran – to join the demonstration.

The police officer declined, but could be heard to be saying, "If I wasn't in this uniform…" 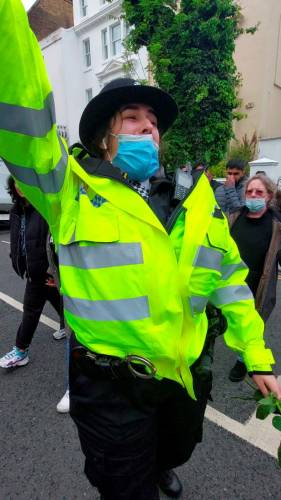 The Metropolitan Police are probing the incident after the video was shared on social media
(Image: UnBoxPHD / SWNS.com)

A conversation then took place between the officer and the woman, in which the officer accepted a white rose from a protester, but said she needed to stay put "in case anything happens".

And before parting ways, the officer and the protester shared a hug – before the officer then raised a fist and called, "Free, free Palestine" as she returned to her station.

The moment was captured on camera by a 28-year-old man standing nearby, who did not wish to be named – but who said he was "surprised" to see the officer taking a stance.

He said: "As a law graduate, I was a bit surprised to see it. I did think to myself, is that the right thing for her to be doing? 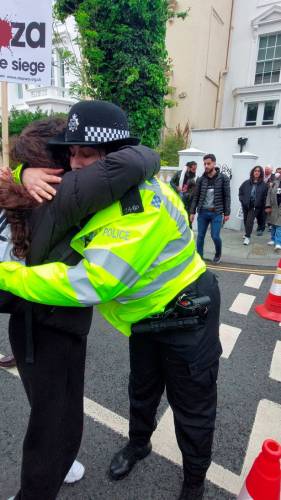 "Obviously I support Palestine, but if she is in uniform and on duty, she should have remained neutral.

"Her job is to protect the public, and she was there joining in with them.

"I do respect that she tried her best to tell the protesters that she couldn't join in with them – but then she shouldn't have done what she did right at the end."

The man added that about 150,000 attended the event – but that it was "completely peaceful and civilised", from what he could tell. 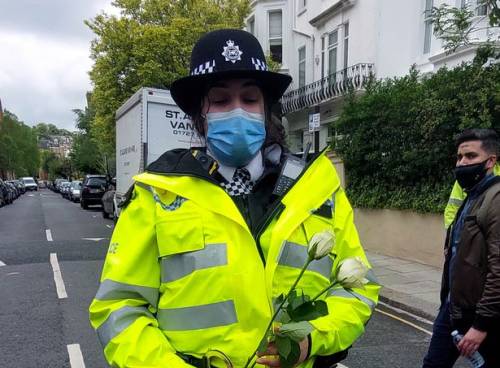 The Met said it is reviewing the footage from Saturday's protest
(Image: UnBoxPHD / SWNS.com)

The Met Police has said it is reviewing the footage of the officer in question.

A spokesperson for the force said: "We are reviewing this footage and a further update will be released shortly.

"We police hundreds of events and protests every year and officers must remain independent and impartial in carrying out their duties.

"While officers are encouraged to positively engage with those attending demonstrations, they know they are not to actively participate or adopt political positions.

"This is vital to ensuring the public have confidence in our officers.

"The Directorate of Professional Standards has been informed and are investigating the full circumstances of this incident to determine what further action is appropriate."

Previous : TV reporter rescues stolen dog live on air after spotting him during broadcast
Next : Teenager, 17, died after falling onto live railway line while having a ‘bit of fun’