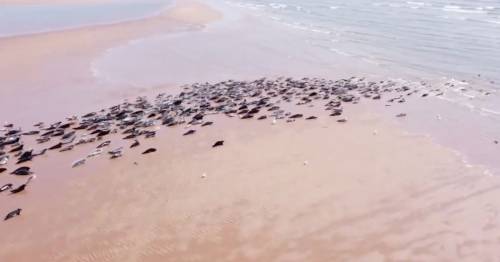 Cops are looking for some drone operators who scared a seal colony, causing the animals to stampede.

The footage was recorded on a beach in Forvie nature reserve near Newburgh in Aberdeenshire, Scotland.

The area is protected by Marine Scotland and disturbing the animals is a criminal offence, the Daily Record reports.

In the video, a drone gets close to the mammals, making them scared and causing them to stampede into the water.

The operators then turn the camera on themselves and a small group of people can be seen on the beach.

The video caused anger in the local community, with calls to identify the culprits.

The video was filmed on a beach in Forvie nature reserve

Ythan Seal Watch help to look after the seals that choose to mate in the area – and posted the footage online in a bid to identify the drone operators.

Harassing a designated Seal haul-out is a wildlife crime and can carry a fine of up to £5,000 or six months in prison.

A statement from the group asked for help in identifying the visitors who disturbed the animals.

It read: "We do not have the details for this visitor who was flying this drone and caused this stampede and we would very much like to identify them to Police Scotland. 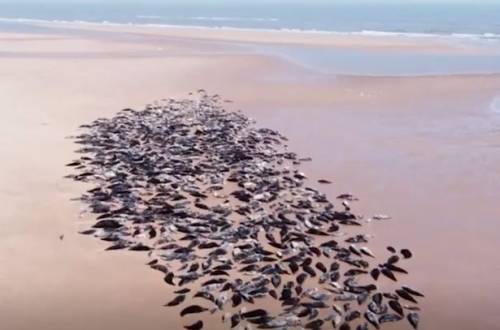 The animals got scared as the drone got close to them

"If anyone can provide information on this incident or the visitor flying the drone but is reluctant to contact Police Scotland you can contact us in confidence and we will pass the information on along with what we have taken from social media.

"The visitor very kindly filmed themselves and we have a screenshot in the comment section. The pilot is seen using the controls."

Ythan Seal Watch urged visitors to Newburgh beach to report people flying drones on the site to the police. 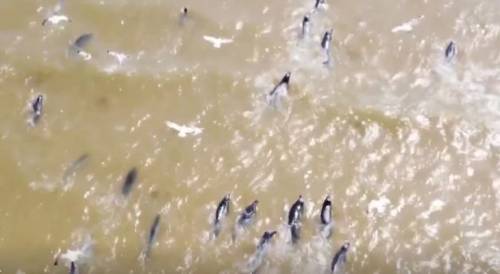 PC Charlie Everitt of the UK National Wildlife Crime Unit explained how serious offences like this are.

He said: "Wildlife crime is treated seriously by Police Scotland and can result in a criminal record for offenders.

"Breeding wild birds, dolphins, whales and seals are all protected from harassment or disturbance by law that currently imposes fines up to £5,000 or imprisonment for up to six months on those who break it.

"Irrespective of whether the offender is an egg collector, boat skipper or drone operator, the possible sentences are the same.

"It is therefore essential that drone operators understand the law, research the legal status and behaviour of any wildlife they intend to film, and obtain the necessary licences to keep on the right side of the law.”

A Police Scotland spokesperson added: "It is understandable that people want to watch the wildlife which lives in our waters and on the coastline but it is vitally important that this is done responsibly without disturbing the animals.

"We would recommend anyone watching marine wildlife keep their distance and follow the Scottish Marine Wildlife Watching Code. This offers practical guidance for everyone who watches marine wildlife around Scotland, whether they are on the shore or at sea – and will help you stay within the law.

“We would encourage anyone witnessing a suspected crime to contact Police Scotland on 101."

Previous : Man tied bedsheets to climb out of window and escape Covid hotel quarantine – World News
Next : Fury as donkeys forced to carry beach-goers across sand despite 30C heatwave