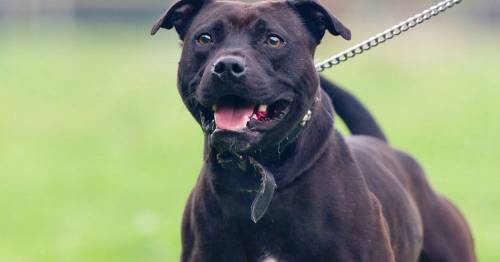 A vicious dog that bit a young boy in the face during a horrifying attack is being hunted by police.

The crazed Staffie set upon the nine-year-old near to his primary school in Stoke-on-Trent, Staffordshire.

The lad almost had his lip ripped off after being mauled by the out-of-control pet.

He was rushed to hospital following the attack late last month and is now recovering at home.

Police are desperately trying to track down the dog's owners and have released graphic images which show the unnamed child with a bloody puncture wound to his face.

Police have released images of the attack late last month
(

Officers say they want to speak to the owners of a brown or ginger coloured Staffordshire Bull Terrier believed to have been involved.

A Staffordshire Police spokesperson said: "Officers are appealing for information after a nine-year-old boy was bitten by a dog in Stoke-on-Trent.

"At approximately 5:45pm on Wednesday 20 April, a boy was bitten on the face by a dog on Belgrave Road, Dresden, at the rear of Belgrave St. Bartholomew’s Academy.

"He suffered facial injuries and was transported to hospital for treatment.

"Police are conducting enquiries locally and would like to speak to the owner of a large brown/ginger coloured Staffordshire Bull Terrier."

The owner of the dog is described as being a white woman, around 5ft 6in tall, aged late 30s to early 40s and of a slim build with light brown shoulder length hair.

She was wearing sunglasses on her head at the time of the incident.

She was with a man who is described as white, roughly 6ft tall, in his 40s, of medium build with grey crewcut hair and a full grey beard.

He was wearing slim blue jeans and a black polo with blue and red lines on the collar.