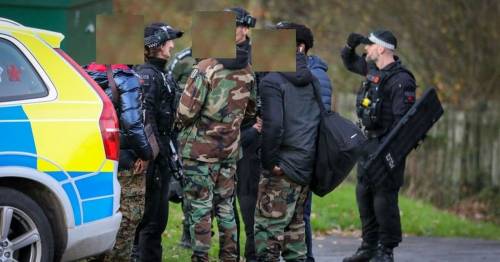 Armed police swooped on a park after men dressed in army fatigues for a music video sparked panic.

At least 10 armed police rushed to Queen's Park in Heywood on Sunday following reports from startled members of the public.

A group of four men were seen walking through the park wearing 'full camouflage and balaclavas', Manchester Evening News reported.

Pictures from the scene show three men being spoken to police, while a police helicopter circled overhead.

One witness said he saw the men walking through the lower end of the park towards the woods at about 3pm.

At least ten armed officers were called to the scene
(

He said: "There were four lads, all in full camouflage, walking through the lower end of the park, past the tennis courts.

"They were all balaclava up.

"A lot of people were on their phones to the police."

Another witness said the men told him they were shooting a music video in the woods.

The group of men were spotted at about 3pm
(

He said: "They had cameras with them.

"I spoke to them and asked if they were filming a music video or something and they just laughed and said 'Yeah'.

"I could see five armed response vehicles and the helicopter was up for ages.

"It was a big operation and must have cost some money to respond like that."

Previous : Armed police swarm city centre caravan site after showdown between owner and occupiers
Next : From the Rock to Fraggle Rock: N.L. director takes on reboot of iconic TV show