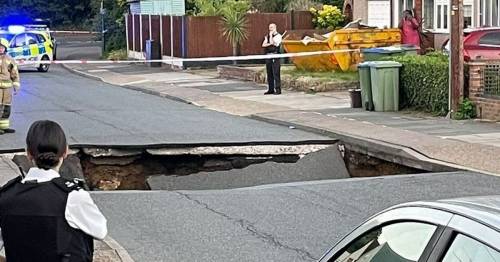 Police have closed a residential road after a huge " sinkhole " swallowed part of the street.

Officers and firefighters were called to the scene in Bexleyheath, south-east London, at around 9.30pm.

Dramatic pictures show how the crater spans the width of the residential road, MyLondon reports.

Police tape has been set up in the street to prevent people from falling into the pit.

It has yet to be confirmed whether any injuries have been reported as a result of last night's incident.

It comes after an ancient forest was discovered more than 600 feet underground in a sinkhole in China.

Police have cordoned off the road due to the crater
(

The forest of trees and plants was discovered by explorers on May 6 in Leye County in the Guangxi Zhuang Autonomous Region and could contain species not yet discovered.

Three entrances were found inside the cave which measures 1,004 feet long and 492 feet wide.

A team of scientists rappelled into the sinkhole on its discovery where they found ancient trees 131 feet tall stretching their branches towards the sun at the sinkhole entrance.

Southern China is home to karst topography, a landscape characterised by caves, sinkholes and underground streams.

Chen Lixin, the expedition team leader, told Live Science : "I wouldn't be surprised to know that there are species found in these caves that have never been reported or described by science until now."

George Veni, executive director of the National Cave and Karst Research Institute (NCKRI) in America, explained that China’s landscape offers access to giant sinkholes which are incredible to explore.

The hole spans the width of the road
(

He said: "Because of local differences in geology, climate and other factors, the way karst appears at the surface can be dramatically different.

"So in China you have this incredibly visually spectacular karst with enormous sinkholes and giant cave entrances and so forth.

“In other parts of the world you walk out on the karst and you really don't notice anything.

“Sinkholes might be quite subdued, only a meter or two in diameter. Cave entrances might be very small, so you have to squeeze your way into them."

Sinkholes and caves can be refuges for life and hold deep stores of underground water known as Karst aquifers.

These provide the primary water source for around 700 million people around the world.

In the United States, around 40 per cent of groundwater used for drinking comes from Karst aquifers.

This can be problematic when the water sources become polluted by human activity.

Sinkholes are formed when slightly acidic rainwater starts to dissolve the bedrock in a karst landscape.

As the water runs through the soil it collects carbon dioxide making it more acidic.

The water then flows through cracks in the bedrock and eventually hollows into tunnels and voids.

When the holes become big enough it causes the ceiling to collapse and form into a sinkhole.

The latest discovery is the 30th sinkhole to be discovered in the region in China.

It is known as the heavenly pit and was formed due to soil being trapped in the limestone.

Previous : Child impaled in the chest by catfish in rare attack during family fishing trip
Next : Russia unveils ‘Prometheus’ system to wipe out nukes after chilling WW3 warning – World News