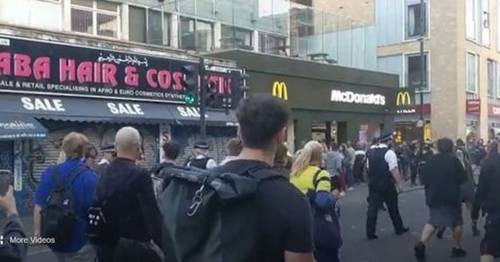 Police ‘chased’ down street during ‘violent’ protest and called ‘scum’

A protest in east London turned violent on Saturday night with reports of police being chased down the street.

Hundreds of demonstrators had earlier taken to the streets in Kingsland High Street in Dalston.

Chants of 'scum' and 'f**k the police' could be heard as officers were forced down the street.

A MyLondon reporter at the scene described seeing protestors throwing bottles, before surrounding a lone police car and hitting it with rocks.

Earlier in the day chants of "let them go" were heard being directed at a group of officers, reportedly in relation to people who had been detained.

Video footage of the incident was shared on social media, meanwhile, with one Twitter user describing the scenes as 'horrendous'.

The tweet was captioned: "Horrendous scenes today in Dalston, as police undertook an immigration raid on delivery drivers."

Another user said in a tweet, which was shared over a thousand times, that three people had been detained and encouraged others to join in the protest.

The Met police has since reported that officers were performing a pre-planned operation against 'e-scooter and moped-enabled crime'.

A statement in response to the incident read: "At around 19:00hrs on Saturday, 14 May officers were carrying out a pre-planned operation in Ashwin Street, Dalston targeting e-scooters and moped-enabled crime.

"In the course of this operation they stopped a man who was shown as being wanted for immigration offences.

"As officers went to arrest him for these offences a crowd gathered and tried to stop them. In a very short time the crowd grew significantly in size.

"We are aware of efforts on social media to summon people to the area specifically to obstruct officers, suggesting the incident was an ‘immigration raid’.

"A number of officers were assaulted. Fortunately they did not require hospital treatment. Police vehicles were also damaged. Several arrests were made for offences including violent disorder.

"We are aware of a number of videos on social media filmed during the incident. We would urge people to remember that such videos rarely provide a full and accurate picture of what is taking place."