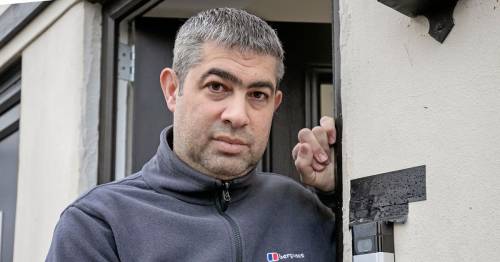 A plumber fears losing his home after being ordered to pay £100,000 to a neighbour who claimed his Ring doorbell breached her privacy.

Jon Woodard's use of Amazon Ring doorbell cameras have been found to breach the privacy of Doctor Mary Fairhurst's in a landmark legal case.

Dr Fairhurst claims Mr Woodard's camera use amounted to harassment and says it forced her to move out of her home in Thame, Oxfordshire.

She says the internet-connected gadgets – sold by Amazon – were "intrusive" and a judge agreed.

Mr Woodard says he was "extremely disappointed and shocked" by the verdict, is now "petrified" about losing his home.

He said: “This court ruling means I am probably going to have to go bankrupt and close the business down because I can’t afford £100,000, I can’t even afford £5,000. How is that fair?

Jon Woodard , whose neighbour fled her home after he installed Ring doorbells and is suing him for £100k
(

"It’s going to ruin my life", Jon told the Sun.

The doorbell connects to the Wifi and tells the homeowner when they're out via smartphone when a visitor turns up on the doorstep.

Using an app, the owner can watch visitors through the camera and talk to them via the doorbell's microphone.

Mr Woodard – who works as an audio-visual technician – says he fitted four cameras around his property, MailOnline reports.

Two of the devices were dummies and he used them to deter car thieves after an attempted theft in 2019, he said.

Dr Fairhurst – who is the director of a holistic healthcare company – told Oxford County Court she considered the devices "continuous visual surveillance".

More than 100,000 people in the UK own a Ring doorbell, meaning the ruling yesterday could pave the way for similar cases across the country.

The neighbours were peaceful until recently when the doctor claims Mr Woodard became "aggressive" when she told him she was unhappy about the doorbell, Oxford County Court heard.

Jon's ring doorbell attached to his home alongside the front door
(

The ruling now entitles Dr Fairhurst to compensation and Mr Woodard is banned from recording her with his surveillance cameras.

Any images or audio files of Dr Fairhurst stored on the devices are now considered her personal data.

The judge also found that Mr Woodard – considered a "data controller" by the Information Commissioner – failed to store Dr Fairhurst's data in a "fair or transparent way".

Judge Clarke said Mr Woodard had collected the doctor's personal data by recording her beyond the boundaries of his property.

Mr Woodard also said he worries that "tens of thousands of homeowners" with similar devices may now be "targeted" in the same way.

Amazon-owned Ring has now asked its customers to make visitors aware they are being recorded in response to the landmark ruling.

Jon is pictured with his partner Nicola Copelin outside their home

A spokesperson for the California-based company told The Mail: "We strongly encourage our customers to respect their neighbours' privacy and comply with any applicable laws when using their Ring device.

"We've put features in place across all our devices to ensure privacy, security, and user control remain front and centre – including customisable Privacy Zones to block out 'off-limit' areas, Motion Zones to control the areas customers want their Ring device to detect motion and Audio Toggle to turn audio on and off."

Damages payable to Dr Fairhurt are expected to be revealed during a November court date, but she could be awarded £100,000.

The ruling means that anyone with the same Ring doorbell who is accused of filming people outside their property could be subject of a similar lawsuit over breaching the privacy of their neighbours.

Previous : By blinking first on vaccine deadline, Quebec may have given unvaccinated health workers upper hand
Next : Meghan Markle and Harry ‘not interested in making things work’ with royals, says expert