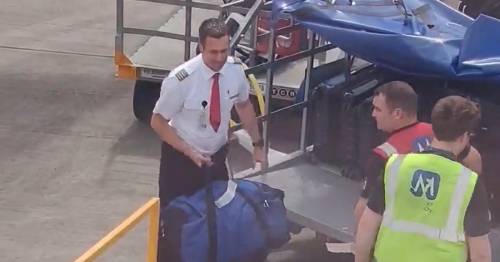 A kind-hearted pilot has been captured helping ground crew to load up a plane, as strikes and staff shortages continue to bring travel grinding to a halt across the UK.

Footage shows the captain lifting luggage onto a conveyor belt ahead of the Edelweiss Air flight from Edinburgh Airport.

A passenger posted the video to social media alongside the caption: "That's a can do attitude!!!"

The clip comes amid ongoing disruption at UK airports over the past few months, as airlines struggle with a shortage in workers and a rise in demand.

The extent of the chaos was laid bare at Heathrow on Friday, as photos emerged of a huge collection of abandoned bags piled up in a baggage hall waiting to be collected.

Meanwhile, easyJet passenger David Benjamin was left furious after his luggage appeared ripped to shreds, with his belongings inside damaged beyond repair.

And a couple who enjoyed a trip to Lanzarote to celebrate the imminent arrival of their first child were left fuming when their Tui flight home was cancelled.

Seven-months pregnant Ceri Burns and Chris Goulding, from Solihull, faced 24 hours of hell after their flight was delayed then eventually cancelled.

The couple were first told the plane would be delayed by an hour when they arrived at Lanzarote's César Manrique-Lanzarote Airport.

Their wait quickly descended into chaos as stranded passengers started arguing with airline staff as it became clear they would not be flying home.

"We're trying to get a refund from TUI but they are saying they don't recognise our booking reference," Chris said. "We also want reimbursement for the flights and taxis we had to book. I've lost complete faith in TUI."

Heaps of luggage piled up pending collection at Heathrow Airport
(

Separately at Heathrow, the scene of an "enormous luggage carpet" was recorded by Sky News defence and security correspondent Deborah Haynes as she left the airport's Terminal 2 after an early evening arrival from Brussels.

She said: "The warning signs that all was not well were clear at baggage claim.

"There were clusters of suitcases without owners grouped around various conveyor belts."

And at Gatwick Airport, Mr Benjamin picked up his suitcase only to discover it had been strewn open at the front, with the wheels also damaged.

His belongings inside were damaged beyond repair
(

The 63-year-old said: “The only way I can describe it is imagine putting a drill through fabric – it looks as though it has been torn and crushed."

He added: "They obviously knew it was damaged because of the delay and how they laid it carefully on the front to hide it.

"Everything got crushed. The shorts on the top got completely mangled. No conveyor belt can do this sort of damage, to me it looks it has been caused by some sort of vehicle."

Pressure is mounting on airports and airlines to handle the influx of those going abroad on holiday.

Gatwick is planning to limit its number of daily flights to 825 in July and 850 in August compared with a reported 900 daily flights during the same time period in previous years.

It comes after a busy Jubilee holiday week, which saw more than 150 flights being cancelled across the UK on the eve of the celebrations.

Elsewhere in the travel sector, the RMT confirmed that strikes at Network Rail and 13 train operators will go ahead on Tuesday, Thursday and next Saturday, and on London Underground on Tuesday.

General secretary Mick Lynch said the union had no choice but to act after the train operators had still not made a pay offer when talks adjourned on Thursday.

"We have to fight this because we haven't had any pay rises, we are faced with thousands of job cuts and they want to rip up our terms and conditions in a form of hire and re-hire that is internal to the railway," he told Sky News.

The Mirror has reached out to Edelweiss Air and Edinburgh Airport for comment.