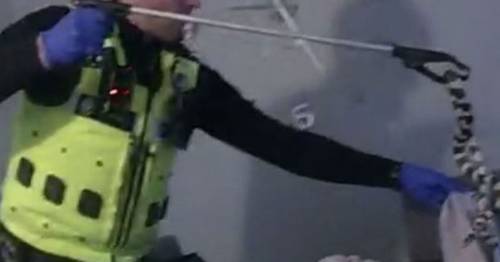 A family had the fright of their life after spotting a five-foot snake making its way across their living room floor.

The horrified dad, who feared the serpent could be dangerous, then called 999 as he ushered his children into another room in their flat.

Officers who attended the address in Hodge Hill, Birmingham, found the black and white reptile hiding under a sofa last weekend.

With the RSPCA unable to respond until the next morning, the police were then left with the unenviable task of using a grabber to put the snake into a pillow case before placing it in a cage, reports BirminghamLive.

Police found the snake hiding under a sofa
(

They were guided by a call centre staff member at West Midlands Police who doubles up as the in-house reptile expert having previously worked in animal research.

In body-worn camera footage, one of the response officers can be heard saying: "Do I need to record the time of arrest?"

After being captured, the snake was safely moved into a case and taken to a local reptile house.

Police are not certain on how the serpent made its way into the flat, but suspect it may got in via the pipe system.

A spokesperson for West Midlands Police said: "A police officer’s day is never dull – as one of our response teams found when called to help a family who’d found a snake in their home.

"We took an emergency call on Sunday night from a dad who’d found the 1.5-metre snake slithering across their lounge floor.

"Worried the black and white snake could be venomous he quickly moved his children to another room and called us for help.

"RSPCA colleagues weren’t able to attend until the morning so our officers went to lend a hand – equipped with a grabber and pillow case.

"They found the snake underneath a sofa and managed to safely pop it unto the case and take it to a local reptile house. One of our call centre staff – our in-house reptile expert having worked in animal research for the University of British Columbia – had offered advice on the likely type of snake and handling tips.

"We’re not sure how the snake got into the flat in Hodge Hill, Birmingham.

"It’s suspected it may have got in through the pipe system. The snake is absolutely fine and will be looking for a new home."

Previous : Man gets planning permission to build hidden underground tunnel beneath house
Next : World Cup fans could be jailed for seven years if they have a one night stand in Qatar