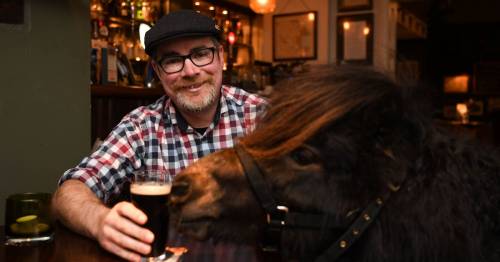 Locals have launched a petition calling for a Shetland pony to be named the new mayor of their village.

Patrick the Pony, who is just seven hands high and enjoying a pint at the village pub, already has celebrity status in Cockington, Devon.

More than 130 people have signed an online petition for him to be made mayor.

Kirk Petrakis, the pony's owner, told DevonLive: "He is well known in Cockington.

"He lived there for about two years until sadly there were not any suitable grazing fields available for him, so he had to leave.

“The Drum Inn’s manager Matthew Mckinley-Booton appreciated Patrick The Pony so much he organised a special place for him to come and visit regularly, so the locals and tourists can still enjoy seeing him in Cockington.”

Patrick the Pony is already a local hero
(

Patrick is already the official mascot for The War Horse Memorial and has helped raise thousands of pounds for equine charities.

He is also the official mascot for Devon Recovery Learning Community, supporting people with mental health and recovery.

The little pony has visited hospitals, recovery groups, mental health wards, specialised schools and even wakes, where Kirk says his presence has provided comfort and support to many going through challenging times.

He added: "Patrick has helped us to raise money for Ukraine, and also we have raised money for two defibrillators in Cockington with the help of the kind community.

Patrick is known to enjoy a pint
(

"We believe Patrick would be a brilliant pony Mayor for Cockington, being non-judgemental and genuinely caring and supportive to all.”

In April, we reported how a black cat in Michigan was named the mayor of a town called Hell.

Jinx the cat has attracted a huge following on social media due to the issues that she was born with – huge eyes and oversized feet and has been with her owner Mia since 2018.

The popular cat was given the keys to govern Hell, Michigan, in the US, on Sunday, April 24, at 4pm (9pm UK time).

Hell is a township that is located 20 miles northwest of Ann Arbor with a population of around 72 people.

The town offers anyone the chance to become "mayor of Hell" for the day or even just for an hour.

You can sign up on the website and request a slot for your time as mayor – and you’ll even be impeached when your term ends.

Previous : Ministers must ‘get around the table’ with unions to stop ‘cruel’ rail strikes, says Tory MP
Next : ‘I dumped my partner until he let me become a housewife – I have high expectations’