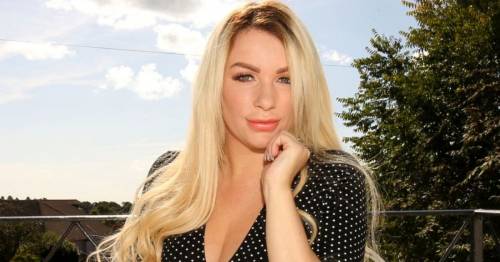 A model has revealed how a police officer secretly filmed her naked after posing as a fake photographer.

Kirsty Lee posed for a luxury hotel photoshoot in April 2017 with a 'pilot' called 'Harrison' who had a side-line in photography.

Three years later, Kirsty received a call from the police, who'd found naked videos of her changing in the hotel bathroom that day.

Perverted Corbel, who used cameras disguised as alarm clocks, watches and air fresheners to secretly film women, has since been convicted for voyeurism.

Horrified Kirsty, who has bravely waived her right to anonymity, said: "He seemed friendly and professional.

"Now I know the truth, I feel disgusted knowing a high-end police officer was capable of such depravity.

"It has made me lose faith in the police force, as well as my own profession."

Kirsty is a professional model
(

She found out other women had been filmed too
(

Kirsty, now 29, became a professional model when she was 18 and appeared in magazines, newspapers, TV shows and advertisements.

She says: "I did everything from glamour to catalogue. When I wasn't modelling for big brands, I used websites that specialised in amateur photographers.

"It was usually men who did photography as a hobby or they were just starting out.

"They'd message my profile under my modelling name, Penny, and set up a shoot."

In April 2017, Kirsty travelled from her home in Brighton to London for the photoshoot.

She met Corbel at a five-star hotel in Westminster.

Neil Corbel was a detective inspector
(

Kirsty says: "As soon as we got to the room, Harrison was really professional and talked through his ideas.

"While he set up the cameras and equipment, I grabbed a heap of clothes and headed into the bathroom to change.

"Then for the next few hours, I went in and out of the bathroom to change into different outfits.

After that day, Kirsty didn't hear from Corbel again and continued modelling as normal.

Three years later, in June 2020, she received a phone call from the Metropolitan police.

She says: "They said they had some footage of me taken by a man and they needed me to identify myself in it.

"Confused, I agreed. When we met they asked if I remembered a man named Harrison.

"I immediately remembered the pilot and told them yes.

"They then showed me a video of me naked, changing in the hotel bathroom.

"Harrison had hidden cameras on the ceiling and had secretly filmed me changing.

"I felt so violated and told them I hadn't consented.

"The officers then told me his name wasn't Harrison and he was Neil Corbel, a high-ranking Metropolitan police officer who specialised in anti-terrorism.

"I was in so much shock. It was really humiliating."

After that, Kirsty soon discovered Corbel had secretly filmed other models and women too.

In September 2021, Neil Corbel, 40, of no fixed address, pleaded guilty to one count of voyeurism against Kirsty at Westminster Magistrates' court.

He also pleaded guilty to 18 counts of voyeurism against other women.

Corbel is due to be sentenced this month at Isleworth Crown Court.

Kirsty says: "I hope he gets a long time in prison. How could someone with so much power do this to innocent women?

"Now, I'm terrified of photographers and have lost trust in my profession.

"I refuse to go to any photoshoots and I only work from home.

"I believe those photographer websites should've vetted 'Harrison' properly. If you're a model, please be wary and overcautious when you're booking shoots to stay safe."

Previous : Coronavirus: What’s happening in Canada and around the world on Friday
Next : London air pollution warning as people told ‘don’t exercise’ amid level 10 alert