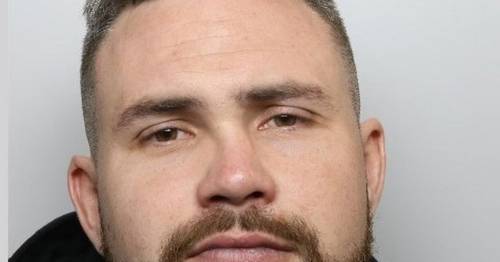 A pervert cried as he was sent down for drunkenly exposing himself to a woman who was sat alone on a train, just hours after being released from prison.

Oliver Trim repeatedly asked the victim to have sex with him in the train’s loos before unzipping his trousers and standing over her.

The terrified woman believed he was going to climb on top of her and rape her.

She managed to send a message to friends, prompting police to board the train at the next station and arrest him.

He sniffed loudly in the dock and was tearful as a judge blasted him for making no attempt to change his “horrible hostility towards women”.

The case was heard at Westminster Magistrates Court
(

He was helped by the victim as his bag became trapped when he walked down the aisle.

Trim then sat near the victim and tried to make conversation with her, telling her he had just been released from prison.

The court heard he asked her to have sex with him in the toilet and whether she was ‘naughty’.

She turned down his offer and ignored him, however he repeated his advances and unzipped his trousers to show his penis.

In a victim impact statement, the woman said: “The incident left me feeling disgusted and in some ways angry, upset and frightened about what happened.

“I didn’t know what to do. If I hadn’t defended myself I believe he would have taken things further. I believed he would rape me. It makes me upset to even think about it.

“I am incredibly anxious to get on board another service to Bristol. I don’t know if I will ever feel comfortable getting on a train alone again.”

The court heard Trim then “squeezed the bottom” of a female police woman.

The officer said in a statement: “I’m a firm believer in being treated fairly and being treated how you would want to be treated. This has had a profound impact on me. I felt upset writing this and very teary.

“Now I feel as if I have had my personal body violated. Although there are no physical injuries I now feel as though this will stay with me for a long time to come.”

Trim was also convicted of calling someone a n****r at Paddington before the exposure incident on the train.

The incident happened on a train from Paddington, London
(

The court heard he was recalled to prison after the incidents and released in April this year.

A report by the probation service said he has missed appointments with them since he was released.

District Judge Angus Hamilton said: “Mr Trim seems to be so unmotivated to do anything about his behaviour. These offences occurred the day he was released from prison, he appears to lack the self-discipline to keep himself out of trouble for 24 hours.

“His record shows a horrible hostility towards women, that may be made worse when he is drunk. He doesn’t appear to be motivated to do anything about his alcohol abuse.”

Jailing him for 37 weeks, Mr Hamilton said: “I do believe strongly in constructive sentencing – sentencing designed to tackle an underlying problem. But there are some cases where that simply isn’t an appropriate form of sentencing and I’m afraid in my view you fall firmly into that category.”

As Trim tried to speak over him, the judge continued: “Despite the offences occurring in June last year and you being at liberty since April this year, you appear to have done very little to address underlying issues and according to probation services you failed to engage with them and missed appointments.

“The exposure was a protracted incident where you repeatedly exposed yourself to a woman who appears to have been targeted because she was on her own in a railway carriage.

“Third is the issue of your record which is appalling and shows a repeated disregard in relation to the safety of women and repeated aggressive assaults on women.”

He was also ordered to pay a fine of £120 for damaging a police cell.