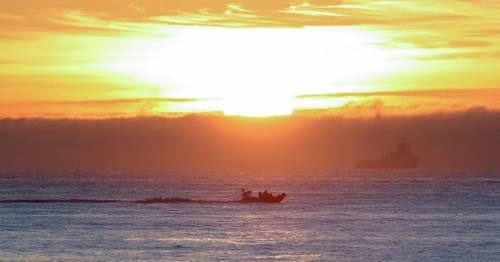 A person pulled from the water in the English Channel has died, according to French authorities.

The individual was found overboard in the sub-zero conditions after a boat carrying another 25 people got into difficulty off the coast of France.

Rescue teams picked up those onboard, as well as five more found on a sandbank.

The unconscious individual was taken back to shore but was declared dead.

No details on the latest person to die attempting to cross the Channel have yet been released.

It comes after at least 271 people aboard 10 small boats reached the UK on Thursday, including a young child.

So far this year, more than 450 people have made the life-threatening trip across the Channel in small boats following a record-breaking year in 2021.

Mike Adamson, chief executive at British Red Cross, said: "It is devastating to hear that another person has lost their life attempting to cross the Channel. Our thoughts are with them and their loved ones – who may not even know yet what has happened.

"This loss comes far too soon after the deaths of 27 people at the end of last year.

"Every death in the Channel is a tragedy. It should be unacceptable to us that people are having to make dangerous crossings in freezing conditions in search of safety. Nobody puts their life at risk like this unless they feel they have no other option and are utterly desperate.

"There are no simple answers, but we urge the Government to rethink its plans for making the UK's asylum system harder to access.

“This should start with ambitious plans for new safe routes and a commitment to resettle 10,000 people a year."

It comes despite the French authorities promising to spend millions of pounds to solve the issue.

Previous : Adorable lurcher in kennels for whole pandemic can’t be without Winnie the Pooh toy
Next : Oldest WWII veteran to be remembered at museum service