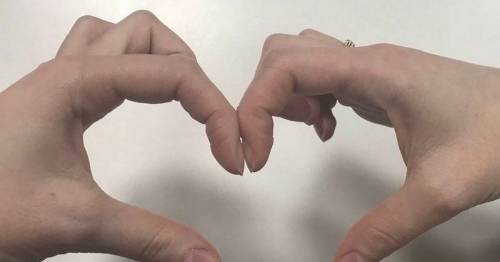 People are being urged to do a finger test that can reveal the early signs of lung cancer, it has been reported.

The test can be done at home and can show if you have finger clubbing – the swelling and softening of fingers and nails.

It can be a sign of several underlying health conditions, particularly ones that affect the lungs or heart, including cancers such as lung cancer and mesothelioma.

More than 35 per cent of people with non-small cell lung cancer experience finger clubbing, according to Cancer Research UK.

The charity also says it can be found in some people with thyroid problems or other conditions such as ulcerative colitis and Crohn’s disease.

You can easily do this yourself by doing the Schamroth window test – or window gap test.

Press your thumbnails or index finger together, and see if there is a small diamond-shaped window between them.

If you cannot see a window then it is possible you have finger clubbing – and you should speak to a doctor to find out why.

Finger clubbing generally takes years to develop, but it can happen quicker in certain conditions such as a lung abscess.

In a post on their website, Cancer Research says: "Finger clubbing is unusual. If you have it and are worried, do speak to your doctor.

"They can examine you and find out about any other symptoms you might have.

"They should send you for a chest x-ray to check your heart and lungs."

What is finger clubbing?

Finger clubbing usually affects the top of the fingers on both hands. And can also affect toes. It seems to happen in stages:

The charity added: "Clubbing is thought to be caused by fluid collecting in the soft tissues at the end of the fingers.

"This is caused by more blood flowing to the area than usual. But we don't fully understand why this happens.

"It may be due to the tumour producing particular chemicals or hormones."