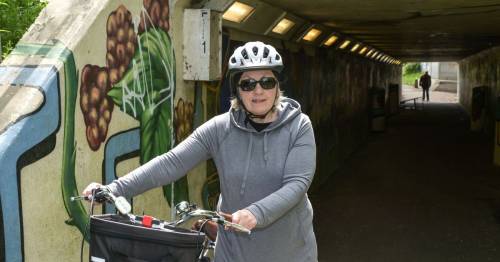 A petrified pensioned is so scared of the "terror" estate she lives on that she felt she couldn't leave home without a knife for years.

Pat Reynolds, 67, says the drugged-up reprobates near her home in Spondon, Derbyshire, are so lawless that she had to arm herself whenever she walked out of her front door.

The yobs continue to make life hell for the residents with their anti-social behaviour and weed-smoking every night.

She even claims some of the youths defecate in the graffiti-covered tunnel meaning parents are too worried to let their children step outside.

Locals have accused police of doing nothing as the hooded hoodlums smash glass, burn wood and ride scooters at high speed, terrifying the elderly and leaving families furious.

The tunnel is so notorious that it's seen as off-limits after dark.

“I cycle through it in the day but wouldn't use it at night," mum-of-two Mrs Reynolds told The Sun.

"We all use it as a short cut. I used to take a knife around with me but I don’t any more as I’ve got older and wiser.

"I dread to think what they get up to in there. It doesn't feel all that safe to be out and about when they are.”

The area is in a mess as hooded youths break glass, burn wood and ride scooters at fast speeds
(

Her neighbour, retired carer Heather Pidgeon, 69, says she is now "too scared" to leave her house at night because of the abuse dished out.

Councillor Yvonne Williams recently said: "One of the things that we are looking at doing now is making the Arnhem tunnel a priority for the coming financial year to see if there is something we can do to stop these mopeds coming in and out because it is really dangerous.

Their behaviour on the estate has spiralled out of control
(

"We are also looking at what we can do to make the tunnel a nicer place as well.

"We did some work several years ago with graffiti artists in memory of some young people who had unfortunately died.

"But it has been a long while and so we are looking into that and getting it a little spruced up."