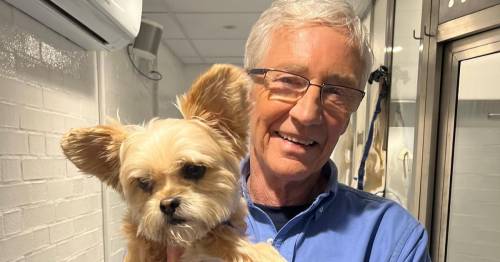 Paul O'Grady fans have issued a heartfelt plea for him to adopt another dog after he posed for a picture with the adorable pooch.

The TV legend has a soft spot for animals and has presented For the Love of Dogs, about rescue centre Battersea Dogs & Cats Home, for almost a decade.

The 66-year-old already shares his home with a menagerie of pets including five rescue dogs – Nancy, Arfur, Conchita, Eddie and Sausage.

Having recently adopted Sausage, also known as Soz, Paul breached his self-imposed clause in his contract, which is said to prohibit him from taking animals home from the centre while filming.

Despite this, fans have been urging him to take home little Lola, a rescue dog with bear-like ears, who shared a picture of on Instagram.


In the post, he wrote: "Guess where I am? This is Lola, she’s Spanish and apart from being able to say hello and ask for two beers I can’t say much else but she’s a smashing little dog and before you ask, the answers no- five dogs is quite enough."

Another user said: "Five isn’t an even number though."

A third commented: "Awww she's beautiful. St O'Grady you have changed, not many years ago you said on live radio and television that you couldn't be taken anywhere where there's pets because you would end up taking them all home.

"How do you plead? The 5th amendment, Lola? I have never seen her before in my life, before sneakily taking her to the car and off we go.

"Are you sure Paul you can't be pursued to give her a good home? No! No! No! Looking at her nervously and lovingly. Oh go on then, where do I sign?"

Paul O'Grady: For the Love of Dogs airs on ITV on Wednesdays

Paul has dedicated much of his time to working with animals, including on the hit documentary Paul O'Grady: For the Love of Dogs, which airs on ITV on Wednesdays.

He has long been a vocal supporter of animal rights and is an ambassador for Battersea Dogs and Cats Home, as well as a patron of charities including Orangutan Appeal UK and Wildlife SOS.

But outside of his showbiz bubble, Paul and his devoted husband Andre live a quiet life in Aldington, Kent, alongside their other animals – and pigs, alpacas, chickens, sheep and goats.

"I haven’t heard them sing yet but they can hum and whistle and all three of them are pregnant. La Verne has a tendency to spit."

Paul married his husband Andre in the summer of 2017 after the lovebirds had been dating for ten years before they tied the knot.

The smitten pair got together in the mid-2000s after meeting at a gay club in London called Showplace.

Although they have been married for almost five years, Paul and Andre actually never lived together until the coronavirus pandemic struck.

Paul previously confessed that the idea of living separately from his husband was inspired by Helena Bonham Carter and Tim Burton – who famously lived apart throughout their marriage.

"We’re doing a Helena Bonham Carter and Tim whatshisname, and it works a treat," he told Irish News.

"It’s the same as before. We see each other all the time. We just don’t live together, which for me makes for a perfect relationship because when you’ve had enough, you can say; 'I’ll see you, I’m off'.

"I’m a bit cranky of a morning. I’m a cobra. I don’t get up, I’m exhumed, and I slither down the stairs looking for trouble. But otherwise I’m fine. Andre’s pristine, you know, ­everything’s tidy – and I’m not."

However, when the pandemic struck and the strict isolation rules came to play, Paul decided it was time to move in with Andre so the pair could be close and look after their animal brood together.

Do you have a dog story to sell? Email paige.freshwater@reachplc.com.

Previous : Chelsea star Timo Werner fires Liverpool warning ahead of FA Cup final
Next : Dogs going off their food could be a sign of illness or anxiety, expert claims