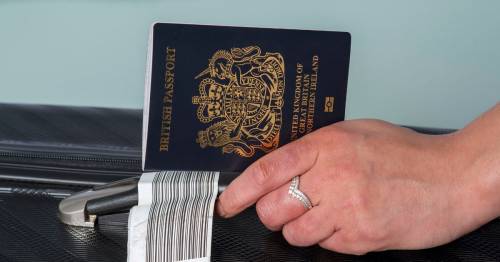 Households applying for fast-track passports say they may have to cancel their holidays because the government passport website keeps crashing.

The waiting time for a new passport has risen from five to 10 weeks as Brits rush to get new ones ahead of the summer holidays.

The hold-ups are being blamed on a backlog of applications as people are allowed to travel again and a shortage of passport workers because of the Ukraine war.

Now families trying to get speedier fast-track passports are beset by technical problems, the Sun reports.

Some trying to renew their passports can only see an error page saying: "Anyone trying to use the website is met with a page saying: "Sorry, we're experiencing high demand for this service at the moment and the system is busy. Please try again later."

Are you having trouble renewing your passport? Message mirror.money.saving@mirror.co.uk

Families have taken to social media to report their despair trying to get new passports.

One woman said on Twitter: "We travel to Greece on 1st June and can’t even get a fast track appointment to replace my 15 year old daughter’s passport, expires 17th July. We are stuffed."

HM Passport Office has said it is currently struggling with a high number of applications and its staff are working flat out.

Replying to one frustrated customer on Twitter today, the Passport Office said: "Please be aware are currently experiencing a high volume of calls and I am sorry that you have been unable to get through to one of our agents."

A spokesperson for HM Passport Office said: "Given recent interest in passports, we are seeing an increased number of people visiting our website to view appointment availability for urgent services. This has not affected people submitting a passport application.

“We have increased staff numbers by 500 since April 2021, which has helped us to handle more applications than ever before, with more than one million passport applications processed in March 2022.”

Yesterday Boris Johnson threatened to "privatise the a**e off" the Passport Office if it struggles to clear its backlog, a senior Government source confirmed.

The Prime Minister even put the DVLA and other "arm's length" bodies on notice during this morning's Cabinet meeting with ministers, according to the source.

The Passport Office is understood to be swamped with backlogs needing 10-week average waiting time.

Millions of Brits up and down the country could end up missing their summer holidays because of the chaos.

The PM is said to be "horrified" at the reports and is set to summon the agency's leader for urgent talks next week.

“These are completely unacceptable delays. British families shouldn't be missing out on hard earned breaks because the Home Office didn’t plan.”

The Passport Office is also warning that availability for in-person appointments for last minute travel will be limited.

Previous : Money Talk: ‘My neighbour keeps using my bin to fly-tip, are they breaking the law?’
Next : WNBA star Brittney Griner’s pre-trial detention in Russia extended as US works to negotiate her release