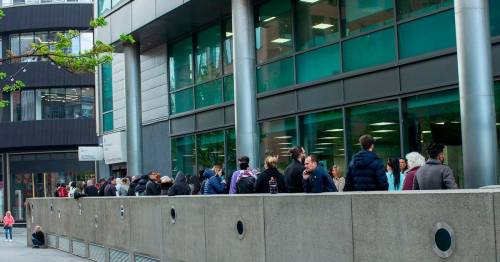 Passport office chaos as hundreds of holidaymakers queue outside for hours

Hundreds of people have been forced to wait for hours in long queues at passport offices as holidaymakers rush to get their papers in time.

Queues outside Liverpool passport office show the wait lots of people will face as processing times for a new passport can now take up to 10 weeks – compared to three weeks pre-pandemic.

According to the HM Passport Office, the government has seen an unprecedented demand in applications for passports with more than five million people delayed applying for a new passport during the pandemic, the Liverpool Echo reports.

The incredible backlog means holidaymakers are facing a battle to get their passport in time for the summer holidays.

The government has seen an unprecedented demand in applications for passports
(

However, Home Office minister Kevin Foster said anyone heading overseas this summer should submit new passport applications and renewals as soon as possible.

He said in the House of Commons: "We are making a range of efforts – staff are working weekends, incentivised overtime – and certainly we're confident we will not need to change the 10-week target."

Those in urgent need of a new passport can make an appointment to visit the their local office to have one issued.

However, there are just seven Passport Customer Service Centres spread around the UK, one of which is based in Liverpool, which showed long queues at the Old Hall Street office as people desperately tried to get their hands on a new passport.

Some people had come from Wales to get their passport
(

Sam Neill was in the queue and said she had travelled with her sister-in-law Claire Porter from North Wales who was waiting to get a fast-track passport in time for her holiday next Monday.

She was also travelling to London to get new passports for her children for their holiday in June as she was "not taking any chances".

Sam said: "I am here with my sister-in-law and she flies on Monday. I am going to London for mine on Thursday for the baby and my daughter so it's the only place I could get an appointment.

"I am actually travelling I have had to get the train down their Thursday."

Sister-in-law Claire added: "We have been here since 11.25am. We are due to fly Monday and we're waiting for my daughter's passport been waiting since February 23.

"It's a joke. Literally been standing here and can't get through to anyone on the phones."

Megan, from St Helens, has booked a hotel in Durham for today in case she is told she has to travel there to get a new passport.

She said: "We sent all the documents here, but they have all been moved to Durham and we are due to fly on Friday to Greece.

"But they have had her [daughter's] passport application for 12 weeks now.

"I have come here today hoping, but I have a hotel booked in Durham tonight in case I have to go to Durham."

Under post-Brexit travel rules holidaymakers need to have at least three months validity on their passports.

As well as the extra complications ministers have warned Britons that they could face up to a ten-week wait for their new passport.

Previous : ‘Parents need more than a one size fits all approach to children’s education’
Next : ‘We’re in 2022’: Quebecers waiting for reliable internet say connectivity is long overdue