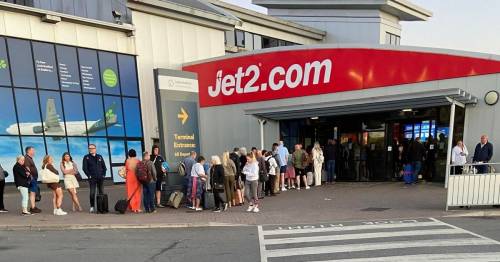 A passenger travelling from Leeds Bradford Airport reported scenes of "chaos" both sides of security.

Long queues were seen at the airport, according to those at the terminal, who said lines were stretching out into the car park – and flights were both delayed and cancelled.

While summer holiday goers are clinging on to hope of the airport problems calming down, upcoming strikes and the busy time of year are creating further issues.

One passenger who was travelling around 4.25am on Monday told Leeds Live he "can't remember the last time a flight was on time".

Simon Greenwood, who travels weekly for work from LBA, said there was only one lane open for the car drop-off before he was waiting in queues trailing out of the airport through to check-in and security.

Queues are stretching towards the car park
(

"There was the usual queues into Jet2.com and the queue into security was all the way back", he said.

He travels to Amsterdam and onto Saudi Arabia weekly, adding that he has fast track so was able to get through security in 30 minutes.

He added that he found passengers sat on the floor.

Simon said: "The airport can't cope. I can't remember the last time I had a flight depart on time.

"People are having to sit on the floor. There is no where to sit airside, it's absolutely rammed everywhere – the bars, restaurants, and seating areas are all so full.

"There's just too many flights in a short space of time. It is an overcrowded and tired airport."

The passenger also said there is a men's toilet which has been out of order for "over a month".

It comes after a number of the ladies toilets were out of order in May during the height of the busy queues.

More passengers shared their experiences from the airport this Monday.

One user on Twitter said: "@LBIAirport total disgrace tonight arriving into UK sat on tarmac for 1 hour and then sat on the bus for further 30 minutes. Disgrace."

One traveller said: "Anyone flying from Leeds Bradford airport for Christmas I'd suggest setting off now."

Last week passengers compared the airport to a "theme park" and airport taxi drivers reported passengers arriving at the airport appeared "unhappy" when they saw the queues.

Demand for flying has bounced back rapidly after the pandemic but businesses have been unable to quickly rehire staff, after thousands were laid off.

Now, anyone flying with Ryanair this June to July could face further interruption due to a staff strike.

Airline staff have plans for industrial action over working conditions and pay.

Ryanair's Spanish cabin staff will be on strike for six days later this month and in early July, main unions said on June 13.

The walkout from June 24 to July 2 follows concerns about working conditions and pay, the USO union said.

The news could fuel more anxiety for passengers travelling from Leeds Bradford Airport where ongoing issues have continued into another month, after beginning in April.