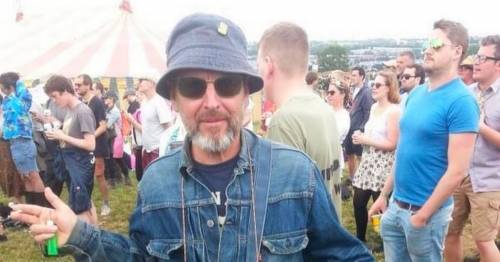 Pals of a big-hearted festival lover who has been told he has weeks to live are desperate to fulfil his “dying wish” to make it to Glastonbury one last time.

Described as having the "kindest soul ever," Nigel Stonehouse, was "thrilled and excited" about the festival finally returning after the pandemic.

Nigel, 58, a bricklayer from Hartlepool, has been going to Glastonbury for 30 years with his friends from all over the country.

He was due to join them at one of the world's largest festivals on Wednesday and was delighted to be seeing Diana Ross perform.

But recently he was given the heartbreaking news that his kidney cancer had spread to his lungs and he is now terminal with just weeks to live.

Now his friends are determined to help him in his final days and are fundraising to pay for a helicopter to get him there as he cannot travel for long without medical help.

Nigel (centre) has been described as the "kindest soul ever"
(

They have raised £6,000 so far and Glastonbury festival bosses say their site medics will be waiting to help him.

One of his close friends, Gemma Thornton, 36, from London, said: "He is the kindest soul ever and we love him so much. He is so gentle.

"But he's happiest when he is in a field with his friends listening to his favourite band.

"It would mean the world to him to get there for one last time."

Fat boy slim, Norman Cook, has donated to the GoFundMe campaign and tweeted the pals to say: “I have donated and will ask my friends to do so too. Sadly I don’t know anyone who owns a helicopter.”

The appeal for Nigel launched at the weekend said: “Calling for help from all who love Glastonbury and hold it in a special place in their heart. This is Nige, he is 58 years old, and he is a Glastonbury Veteran! A wonderful, kind man who is special to all who know him.

“Nige was diagnosed with cancer of his kidney in mid-may; it had unfortunately already spread to his lungs.

The Glastonbury veteran's cancer has spread to his lungs
(

"In the last week, Nige has taken a sudden turn and has been told that not only is his cancer incurable, but it is progressing fast and is aggressive. He has been told he likely has a matter of weeks left.

“Nige was planning to be with us all at Glastonbury next week, and he has made it his dying wish to make it there, even if only for a few hours for one last time.

“He is currently an inpatient at North Tees hospital, and their wonderful palliative care team have assured him that they will do all they can to make this happen.

"Within hours they had contacted site managers at the festival who advised that they would facilitate in ways that they can.

"Unfortunately there is no space left in the accessible areas (Nige has a general sale ticket) but they will facilitate entry via the accessible car park.

“Now to the hard part! Getting Nige all the way there…..

“This is obviously a HUGE undertaking, and will be costly. The palliative care team suggested commissioning a helicopter to get him there and back – the first quote we have had is for £12k.

Fatboy Slim has donated to the fundraiser for Nigel (left)
(

“We are asking that anyone who is able, makes a donation no matter how small to try and help us make this happen.

"We realise logistically this will be huge, and that we have very little time, but we want to move heaven and earth to get him there. It would mean the world to Nige and to all who love him.

“If anybody has any ideas, connections or ANYTHING that could help us make this happen (logistically or financially or any possible way) and fulfil Nigel’s dying wish, we will be forever in your debt and eternally grateful.

“We also realise that even if we raise the funds Nige may be too unwell to get there, in which case the funds will be donated to Glastonbury charities.”

The friends are hoping to get him there on Sunday to watch Diana Ross perform on the Legends slot.

If you want to help Nigel and his friends you can donate here.

Previous : The Tensions of Modern Britain in Jez Butterworth’s “Jerusalem”
Next : Lord Ashcroft’s ex ‘daughter-in-law’ insists she’s ‘not a cocaine addict or a murderer’ – World News