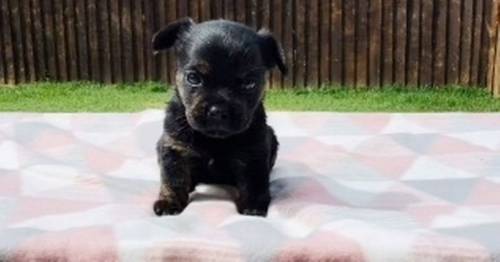 A woman who thought she had bought a purebred French bulldog for her mum as a birthday present says it didn't turn out to be the dog they expected – but they "wouldn't change her for the world".

Bethany Cupples had picked up the five-week-old Frenchie as a gift for her mum in May 2020, saying she was "very surprised" to find the pet was advertised for just £600 on Gumtree, with the breed often costing far more.

When the 21-year-old went to collect the pet, she realised something was amiss but "instantly fell in love" with the dog, which became part of the family.

As Luna the puppy grew older, it became more clear that she wasn't a purebred French bulldog and Bethany, a part-time cleaner, shared a video on her Bethlouiseeexo TikTok account to show what Luna looked like as a puppy compared to now, which quickly went viral.

The family took Luna to the vet, where they discovered that she is a 'Frorkie', which is a mix between a French bulldog and a Yorkshire terrier, as reported by LadBible.

Bethany, from Huddersfield, West Yorkshire, says she believes the seller had made an "honest mistake" in listing Luna as a purebred French bulldog and "wouldn't doubt the seller to be a bad breeder" as the animals she saw were extremely well cared for.

And despite the initial mix up, the family couldn't be happier with Luna, who is thriving in her forever home.

Bethany told LadBibile: "We did look for a Frenchie, but as soon as we laid eyes on her we instantly fell in love.

"No matter the breed or the price, we welcomed her into our family home with open arms.

"She made our family whole and we wouldn't change her for the world, she has the most amazing personality and is a funny individual. We love her to bits."