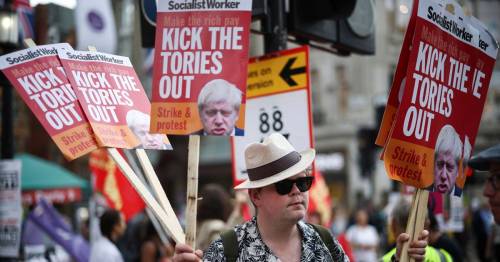 Nurses and teachers are just as entitled as rail workers and every single grafter in the private sector to protect their quality of life when they’ve not created the cost of living crisis.

Out of touch Boris Johnson and his Government are guilty of criminal complacency if they don’t recognise the public mood is turning ugly, the short-changed workers sick of official lectures when Tory tax rises add to the toll.

Inflation is powering wage demands, not wage rises fuelling inflation. Yet dogmatic Ministers adopt the tone of masters expecting servants to know their station and tighten their belts instead of doing whatever they can to fight for their livelihoods and families.

The Government and profitable companies must pay fair when inflation, already at an awful 9%, is forecast to hit 11%.

Nobody wants industrial action, particularly workers who are unpaid when on strike. But treat people badly and they’ll bite back.

Money worries causing some children to self-harm makes the young victims of the cost of living crisis as much as adults.

Kids’ charity The Childhood Trust’s report into the impact of the great financial squeeze under the Tory Government is heartbreaking when one-in-every-five adults notice their kids are smiling less and nearly half report their sons and daughters are feeling the pressure.

Two or three kids in a class of 30 self-harming, as the charity claims, would be disastrous for physical and mental health.

Shielding the vulnerable innocent in homes where food is cut back, there’s little money for toys and trips and bills go unpaid isn’t easy.

This crisis is hurting entire families.

The heat is on

YOU can’t beat a great British summer at its very best and four heatwaves on their way is a real treat.

When airport and airline chaos means many won’t get abroad this year, having cracking weather here is a staycation bonus.

Previous : ‘This Conservative Government is failing – seeking scapegoats to smear amid disasters’ – Kevin Maguire
Next : Queen and Charles only royals to have birthdays marked with flags after Andrew scandal