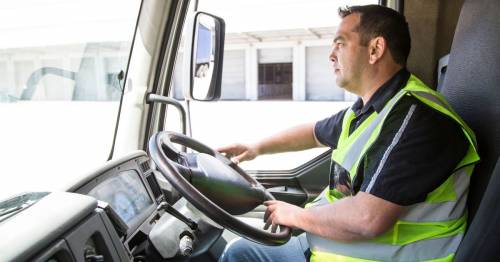 Plans to recruit foreign lorry drivers to prevent Christmas shortages have been branded a "farce" as ministers admitted only 20 visas have been issued – and the application process takes three weeks.

The Government vowed to issue 5,000 temporary visas to HGV drivers and another 5,500 to poultry workers in the run up to the festive period to prevent Christmas misery for families.

But top Tory Oliver Dowden admitted only 20 visas had actually been issued and there had been just 300 applicants.

MPs were told last night that the application process takes a minimum of three weeks – meaning drivers applying now are being drafted in for only two months.

Retailers have been warning of higher prices and Christmas shortages amid ongoing supply issues, partly caused by an acute shortage of HGV drivers, as well as pandemic restrictions and poor weather.

Thousands of shipping containers at the Port of Felixstowe in Suffolk, as shipping giant Maersk has said it is diverting vessels away from UK ports
(

The UK is also experiencing delays in ports, including Felixstowe where container ships have experienced congestion.

He told LBC: "We have 300 people that have applied for these visas.

"I believe the number is just over 20 that actually received them, so are on the road, but I expect that number to increase over time."

Meanwhile, Home Office minister Kevin Foster told MPs that applications for HGV food drivers and poultry workers will be processed in a minimum of 15 working days – or three weeks.

This means that poultry workers who can only stay until 31 December will only be able to stay in the country for around two months.

Liberal Democrat Home Affairs spokesman Alistair Carmichael said: "It is shocking that while supermarket shelves are going empty and our ports are gridlocked, visa applications are still taking three weeks or more to be processed.

“It means some workers will only be allowed in the country for as little as two months by the time their application has been approved. It’s little wonder so few people are taking up the offer to work here under the Conservatives’ botched visa scheme.

“Ministers must end this farce, speed up visa applications and put in place a fair immigration system that enables businesses to recruit the skilled workers they need.

"Otherwise, Boris Johnson's vow to save Christmas risks joining his ever growing list of broken promises."

Chancellor Rishi Sunak tried to reassure people worried about getting their Christmas supplies.

Speaking to the BBC in Washington, he said: "We're doing absolutely everything we can to mitigate some of these challenges.

"They are global in nature so we can't fix every single problem but I feel confident there will be good provision of goods for everybody.

"I'm confident there will be a good amount of Christmas presents available for everyone to buy."

Previous : The Teacher Who Changed How We Teach Writing
Next : Foreign butchers and abattoir workers set to be handed visas amid mass pig cull fears