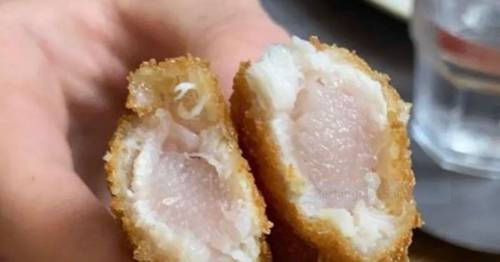 One of Britain’s most exclusive private schools has apologised after it served its £14,000-a-year-paying students raw chicken and a maggot too.

Cheltenham College is one of Britain’s most expensive private schools but it has been forced to apologise after a mistake in the kitchen led to uncooked food being served.

The school has launched an urgent investigation after the chef mistook the chicken for fish goujons, leading to them not being cooked for the proper amount of time.

In a letter to parents bursar Phil Attwell said he was “extremely sorry” for the mistake which took place on April 29.

He claims catering staff mistook the chicken for fish, which would have taken less than half the time to cook.

However the raw chicken was not where it stopped, and a pupil was served a maggot on the same date and to their horror found it wriggling in their vegetables.

Mr Attwell said: “Cheltenham College is extremely sorry that this lapse has occurred. We are leaving no stone unturned in our efforts to ensure that the food that we serve aligns with the standards that our pupils and you as parents expect from us.

"Even though 90 more fish portions had been produced than the previous Friday, the dining hall counter was running out of fish as the end of service approached.

“A member of the chef team cooked off what they believed to be fish goujons, which require five minutes cooking time.

“However, they had in fact cooked chicken goujons which require 12 minutes cooking time. The member of staff took a shortcut by not properly checking (using a probe) that 75 degrees had been reached; the chicken was sent to be served, in a significantly undercooked state.

“Five Upper College pupils received the chicken but notified staff as soon as they spotted the mistake; the meals were quickly recalled, and a replacement meal provided.”

The Victorian school, which opened in 1841 costs around £14,000 to attend for a year and currently has around 640 pupils.

Mr Attwell said the school is reviewing it's internal processes as a result.

Addressing the maggot complaint, he wrote: "The sweetcorn had been run through water in a colander. The lettuce had been run under water, through a leaf spinner and then taken to the counter.

“Both products have been taken off the counter, and suppliers have been asked to comment on their production and supply.

“While it is understood that fresh salad and vegetable items may carry bugs of various types, we of course do not expect these to make it through to serving points.

"Once again, Holroyd Howe are reviewing their processes and those of their suppliers to reduce the likelihood of fresh (or tinned) items carrying unexpected surprises which can then make it through to the plate.”