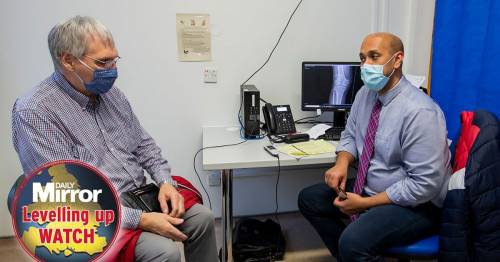 Boris Johnson vowed in 2019 to “level up” healthcare with more NHS staff and 40 new hospitals. But many of the “new” hospitals were refurbs of existing ones. NHS England still has 100,000 vacancies and is enduring its worst staffing crisis.

We visit a hospital where medics say staff shortages are the main barrier to cutting the huge treatment backlog.

One in 10 people are on the NHS waiting list – and many of them are in constant pain. I spoke to patients at New Cross Hospital in Wolverhampton about how they cope while awaiting surgery.

Long waits worsened by the pandemic mean patients have deteriorated when they are seen, with, for example, more in wheelchairs needing joint replacements.

Hospitals are struggling after decades when bed numbers were slashed under the proviso that more patients could be cared for in the community.

A collapse in social care means a growing proportion of hospital beds are taken by elderly patients who are fit for discharge but have nowhere safe to go.

Patients awaiting routine operations described living in pain and being unable to walk or climb stairs.

Retired teacher Susan Martin, 76, has osteoporosis. The pain is so bad she struggles to get out of bed some days.

She injured ligaments in her shoulder five years ago carrying shopping bags.

Susan said: “Just before the pandemic I had a scan on my shoulder. The physio… said he didn’t recommend an operation, but I did wonder whether they were saying that because I was old and they have a lot of people to get through.

“Now I can’t even hoover. I put up with it but now I have problems with my shoulder and back, which has a squashed disc which catches a nerve.

“Some days I don’t want to get out of bed. I would sit on the sofa all day because then the pain would go away.”

Norman Westwood, a retired college dean, was told surgeons would first try steroid injections but he may need a knee replacement.

Norman, 77, said: “The pain is worst at night when you are trying to get to sleep. It got worse and worse and I thought ‘I’ve got to do something about it’.”

Guidance for hospitals is to not routinely have more than 85% of beds being taken up.

It allows ambulances to unload and wards to cope with a sudden influx of patients.

Average bed occupancy since 2017/18 has been over 90%. One way things have been worsened by the pandemic is some beds have to be mothballed to keep Covid and non-Covid patients apart.

Nationally, NHS hospital bed occupancy was at an average of 94% at the start of December and is rising.

I asked Dr Brian McKaig, chief medical officer at the Royal Wolverhampton NHS Trust, when the health service is likely to return to operating at around 85% bed occupancy.

“That seems to be long gone,” he said. He added changing things will require a major increase in community nurses, physiotherapists and social care staff.

He said that in some places ambulances take patients to A&E but “there aren’t any beds for them to go in to”.

He said compared to almost any other developed nation “we are way behind in terms of doctors and nurses per capita”.

At any one time New Cross has 80 to 100 patients fit for discharge but who cannot leave because there is no social care package in place. This is up from between 30 and 40 two years ago.

Increasing patient demand from the ageing population is outstripping Government funding for the NHS.

New Cross coped better than most hospitals at working through its treatment backlog before the pandemic.

On the delay in seeing patients, consultant surgeon Eric Isbister, who specialises in hip and knee replacements, said: “Previously they may have been able to be treated with steroids and physiotherapy – now they are more likely to require surgery.”

Consultant surgeon Richard Dias said even if they doubled pre-pandemic capacity, some hospitals would take until 2035 to clear their backlog. He said staff shortages is the main problem, particularly in nursing.

He added: “What they pay nursing staff, sometimes is like a slap in the face.”

With GPs facing overwhelming workloads, Susan Martin, who also cares for her husband, 78, who is recovering from cancer, said: “It’s hard to see the GP now. We have to phone and ask the doctor to call back. It can take five days. Sometimes we want to see the doctor but all we get is a call.”

The most striking thing about all the patients I spoke to is none blamed the NHS.

Retired nurse Barbara Wilson, 70, had lived with pain for five years and is now due to have two new hips. She struggles to even put her shoes on and was taking morphine daily. “It’s my fault for not coming forward earlier,” she said. 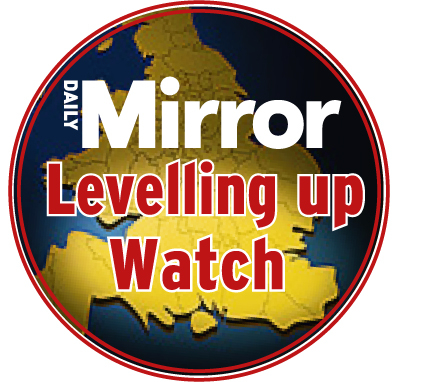 Levelling up is supposed to be the big idea of Boris Johnson’s government.

When he was elected in 2019 he pledged to spread opportunity to every corner of the UK.

But two years later we are still waiting for the Prime Minister to deliver on his promises.

A White Paper setting out the Government’s plan was supposed to have been published this month but has now been shelved until the new year.

Many are starting to question whether Mr Johnson is genuinely committed to spreading wealth and opportunity or if levelling up is just an empty slogan.

That is why the Mirror is today launching Levelling Up Watch.

We intend to hold the Government to account over its plans to improve schools, communities, education and transport.

We also want to see any additional money distributed fairly and not just to seats the Tories need to retain to stay in power.

What is clear is tinkering with the structure of local government and sprinkling money on piecemeal transport schemes will not be enough.

The regional inequality in Britain is not only deep and engrained, it has become starker since the Conservatives came to power in 2010.

During that period more than 1,000 Sure Start Centres have closed, local councils have seen their funding cut by more than 25% and the budgets for public health and education have been badly squeezed.

The additional money announced by Chancellor Rishi Sunak in his Budget will only return per pupil funding to 2010 levels.

People in poorer areas are likely to have worse health and shorter life expectancy but the budget for Public Health England in 2021-22 is 24% – £1billion – lower in real terms than in 2015-16.

We have heard plenty of words from Mr Johnson about his ambitions to level up but the time for rhetoric is over. We need to see some action.

Millions more are expected to join the waiting list with serious conditions they delayed coming forward with due to the pandemic. Clearing the record backlog and reversing the decade-long trend of rising waiting times could be the health service’s biggest ever challenge.

The Department of Health and Social Care said: “The pandemic has put enormous pressure on services, so we’re supporting the NHS with unprecedented funding and support to ensure people get the treatment they need.

“We’re providing an extra £5.4billion to the NHS to respond to Covid up to April, including £478million to free up beds, with £2bn this year and an extra £8bn over the next three years to cut waiting times and [for] an extra nine million checks, scans and operations.”