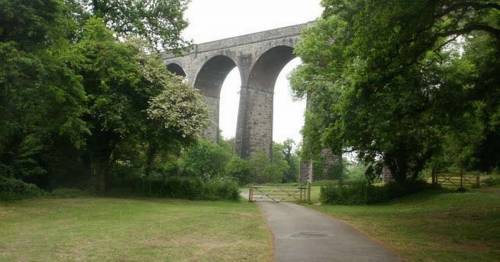 A police officer was caught having outdoor sex in woodland while on duty with a woman who "loves a man in uniform".

PC Andrew Legg, 52, secretly met the woman at Porthkerry Country Park in Barry at night – but was trapped by a tracker in his force car.

The traffic cop had sent messages and photos to the woman before travelling to meet her while on duty.

He drove to a country park at 11pm in an unmarked police car for sex and then for a second time on a police motorbike to her home, a disciplinary hearing was told.

PC Legg admitted gross misconduct and resigned from South Wales Police – but was then banned from working as an officer in England or Wales.

PC Legg drove to the country park at 11pm in an unmarked police car for sex, a disciplinary hearing was told
(

He messaged the woman online before arranging to have sex with her that night, a misconduct panel heard.

Detective inspector Michael Owens said: "During the conversation, he stated he worked in uniform with handcuffs and by that she believed he was a police officer."

The court heard he parked an unmarked police car outside a Home Bargains store near her home and took her to the park for consensual sex outside the police car.

The misconduct panel heard the woman – named only as Miss A later messaged the cop saying: "I love a man in uniform."

In one message she described him as "sexy as f***" to which he replied: "Okey dokey."

Two weeks after their first meet up PC Legg arranged to meet her again when he was still on duty and turned up to her house in uniform.

DI Owens said: "He went to the home of Miss A, went to her bedroom, took off his police uniform, and had consensual sexual intercourse with her."

She later messaged him saying: "You do look sexy in your uniform.

"You blew me away when you turned up like you did."

Miss A asked the officer: "Do you often turn up to your meets in uniform like that?" He replied saying he did not.

Mr Ahearn said: "He apologises for the embarrassment he has caused to South Wales Police and his family.

"He has no previous findings of misconduct against him. He is remorseful for his actions and did not want to end his career in this way."

Chief Constable Jeremy Vaughan said PC Legg would have been dismissed had he not resigned five days before the hearing.

He added: "I am satisfied this was intentional, deliberate, targeted, and planned and thus has a higher degree of culpability. The conduct was repeated after former PC Legg should have realised it was improper.

"Former PC Legg did this while on duty, abusing trust put in him by me and the wider public. Instead of keeping our roads safe, he sought to pursue a course of conduct that took him away from those duties.

"This is completely unacceptable and the damage is done. I would have no hesitation to decide on dismissal as an outcome had he still been serving."