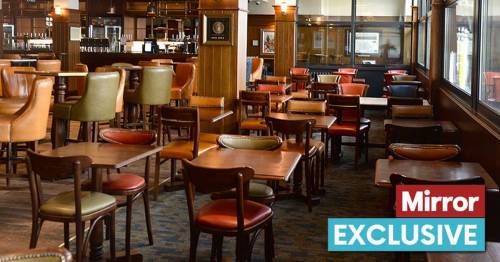 Omicron grants branded an ‘insult’ as most pubs won’t get the full £6,000

Stricken pub chiefs have branded this week’s Omicron grants “an insult” as most boozers are not eligible for the full amount.

England’s councils were given a £700m pot on Friday to dish out “up to £6,000” each to hospitality, leisure and accommodation venues.

Councils are being asked to distribute the grants “as soon as possible” and by February 28.

Official figures suggest more than a third of England’s pubs, restaurants, cafes and bars will receive only the minimum grant.

And well over half of hotels are due only £2,667, our analysis suggests.

The Campaign for Real Ale (CAMRA) warned the sum may cover just one night’s lost takings due to lower footfall.

Michael Kill, chief executive of the Night Time Industries Association, added the grants were “a drop in the ocean” compared to £46k lost by the average business before Christmas.

He told the Mirror: "Over the last two years businesses have been lost, people have lost their careers, some have even lost their family homes due to this pandemic.

“To then amidst the chaos of Christmas have a considerable amount of trade ripped away from them, and be presented with a disproportionate level of support against the backdrop of hundreds of thousands of pounds of losses, can only be seen as an insult.”

We analysed figures from the Valuation Office Agency, which calculates venues’ ‘rateable value’ to set their business rates bill.

Crucially, pubs and wine bars have a median rateable value of £17,500.

This means exactly half of all pubs and wine bars have a rateable value under £17,500 – and suggests a large number are below the £15k threshold.

Similarly, restaurants and cafes have a median rateable value of £16,800.

And “hotels etc” have a median rateable value of just £3,900, meaning well over half are below the £15k threshold.

Separate figures, compiled last year by the House of Commons Library, suggested 38% of pubs, 35% of bars and 25% of nightclubs were below the £15k threshold, giving them the lowest grant.

By comparison, just 23% of pubs were in line for the highest possible grant.

CAMRA national chairman Nik Antona claimed 77% of pubs will not receive the full £6k, adding: “The promised grants are not nearly enough to cover the losses faced by pubs.

“It is really a drop in the water when it comes to daily take-home over the festive period – perhaps covering just one night of lost footfall for most of these pubs.”

Ministers said the grants were part of a £1bn support package, and councils also get £100m of discretionary business support.

A Government spokesperson said: “We recognise that the hospitality and leisure sector has been severely impacted by the Omicron variant which is why we are providing grants of up to £6,000 to businesses facing challenges.

“We have always said that the amount businesses receive is dependent on rateable value and local authority allocations have been calculated based on the business population within each area.”

Previous : ‘Sorry Boris, the Downing Street party’s over – and it’s time for you to leave’ – Kevin Maguire
Next : Bartender’s tip leads to arrest in Key West buoy burning