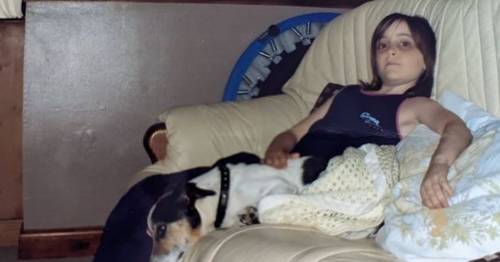 A young girl found herself in hospital, mysteriously unable to move her legs and in terrible pain.

Laura Cross was whisked to A&E after a torrid night at home in Hull when she was a 10-year-old girl.

Doctors were baffled by her condition however, leading her to be placed on a children's ward for further tests.

Before losing sensation in the lower half of her body, nurses cruelly suggested that Laura was making the ailment up because she wanted attention from her parents.

Now an adult, Laura has bravely shared her story for the first time.

After the first surgery as a baby, with a cast
(

As a young child, hospitals very much became my second home. I was born four weeks early, with club feet and lymphedema.

Thankfully, my club feet were corrected when I was six months old, but I did need further surgery when I was seven.

After already teaching myself to walk twice at a young age, I thought my hospital visits were about to become a distant memory, Hull Live reports.

That was until I hit the age of 10. I had settled back into school, and my parents had just got married – I was a happy, normal, child.

But one night, I couldn’t sleep due to a pain in my legs. I told my parents, who of course thought it was growing pains at that age. But after a few nights and the pain getting worse, they quickly realised it was something much more serious.

After a night of crying in bed, my exasperated parents rushed me to Hull’s A&E, not knowing what else to do. However, after a few simple tests, I was sent home with doctors none the wiser to the problem.

This went on for weeks – It was a rare occurrence when I didn’t go to A&E.

Then, something was different. The pain in my legs had reached new levels, and despite A&E staff's best efforts, I could not stop screaming.

They decided the best option was to admit me to the children's ward where they could do more tests.

I spent weeks there and had more needles and examinations than I could count. But still, doctors were left scratching their heads.

Weeks before the pain started
(

My very tired mum then heard the nurses say: ‘It’s all just for attention – her parents did just get married. She’s probably feeling left out.’

And then one morning, the worst happened. I woke up and couldn’t feel anything from my stomach down.

As a ten-year-old, this was the scariest time of my life. I remember thinking 'I’m never going to walk again.'

My mum spent every night by my bedside, exhausted and begging doctors to find out what was wrong with me. She could not stop worrying about what those nurses had said.

Because I had no feeling from the waist down, I had to be catheterised and needed constant round-the-clock care.

It felt like the nightmare would never end – would I ever get an answer to what was wrong with me?

The doubts from nurses certainly do have an impact on your mental health and I remember thinking ‘Is there actually something wrong with me?’ ‘Maybe this is all in my head.’ I remember countless sleepless nights and crying to my mum that I felt like a burden.

And then, there was a sudden light at the end of the tunnel. A doctor decided to x-ray my spine – rather than my legs this time – to see if this could reveal any answers.

My mum knew the second I’d had the x-ray that they were closer to an answer than ever before because they immediately rushed me off for an MRI of my spine.

A small reminder of the journey
(

A doctor sat us down. “We have found the problem,” he said.

I was diagnosed with a tethered spinal cord and a hidden spina bifida.

A tethered spinal cord essentially means that my spinal cord was attached to the tissue surrounding my spine, and thus prevented movement. As I grew and got older, my symptoms gradually became worse until I was left bedbound.

Spina bifida is described by the NHS as “when a baby's spine and spinal cord does not develop properly in the womb, causing a gap in the spine… It is a neural tube defect.”

Although both of these sounded terrifying, there was also a sense of relief that someone finally believed me. My first question was “Can you fix me?”

The next day I had an eight hour surgery to fix the issues. I think my mum must have paced a hole though the floor of the hospital that day.

My mum kept every card from my hospital stay
(

Waking up from anaesthesia was nothing new to me, but this time felt different. Despite the pain of undergoing major spinal surgery, I also felt relief.

I’ve often tried to describe the feeling, but it’s not so simple. I imagine I must have been in discomfort since being born, but because that feeling was all I knew, I was not aware of it. It now felt like all of my muscles relaxed.

Post surgery, the doctor informed me that I had sprung up a shocking two inches during the procedure releasing my spinal cord.

But I was nowhere near out of the woods yet. I had lost a lot of blood and was at risk for needing blood transfusions.

But there is something quite remarkable about the resilience of children. I had seen first-hand the devastating effects this journey had had on my exhausted mum and was determined to get better for her. She went to grab a coffee one day and I decided to make her proud.

I said to my dad “Today is the day I walk again.”

The prognosis of me walking was due to be a slow one and I knew I had months of physical therapy ahead of me, but everyone has got to start somewhere.

So with the support of my dad (and holding onto a wheelchair), I took my first steps towards my mum.

As she came around the corner and saw me, she burst into tears. I will never forget that moment.

The journey after that became a bit of a blur – soon after, catheters were removed and I started regaining strength in my legs. I was allowed home, but looking back at photographs, I still looked very weak and ill.

I remained under the care of the doctor who treated me until the age of 13 when I stopped growing (I still only reached a mere 4ft11!) and since then I have not stopped taking opportunities in life.

I regularly think of that doctor. Where would I be if he had not believed me like the others? I don’t hold any resentment towards those nurses who didn’t believe me, I take simple satisfaction in knowing that I am as strong as ever.

But the point still remains. This month is Disability History Month and it’s an important time to reflect and take joy in our current health. Disability can take many shapes and forms. It certainly does not discriminate – and neither should we.

Previous : Turkish consumer confidence slides to record low in November
Next : Homeless man’s honest sign helps him get a roof over his head ahead of Christmas