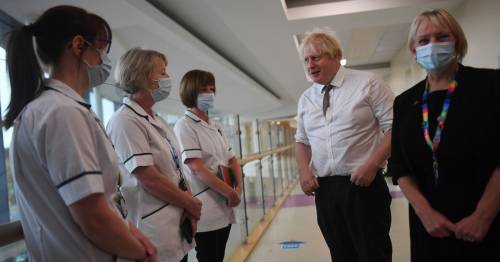 Nurses have expressed their "disbelief" after Tory MPs voted down an amendment that would have required the NHS to calculate how many staff it needed to operate safely.

The amendment that would have required the Government to reveal the true extent of NHS staffing shortages but was rejected by 280 votes to 219.

Currently there are no independent analysis as to how many medics are being trained in the pipeline to meet estimated future demand.

Patricia Marquis, director of the Royal College of Nursing in England, said: “A broad coalition of professional, political and public support has been overlooked by a Government still unwilling to solve the staffing crisis in the NHS and care system.

"There is widespread disappointment and disbelief this evening. When vacancy levels are so high, the move is short-sighted at best and wilfully reckless at worst."

The amendment had been proposed ex-Health Secretary Jeremy Hunt and was supported by nearly 60 of the UK’s most prominent health and care organisations.

The move had been proposed by former Health Secretary Jeremy Hunt
(

It would have required the Government to publish independent workforce projections twice a year to ensure the pipeline of clinical staff in training meets future demand.

There are around 100,000 NHS staffing vacancies advertised in England.

The Health Foundation projects an extra 4,000 doctors and 17,000 nurses will be required to clear the backlog.

Nowhere near the amount deeded are thought to be in the training pipeline.

Full time equivalent GP numbers are actually falling as more leave or cut their hours than join the workforce.

Currently the NHS pays around £6billion a year on locums to fill staffing gaps.

Jeremy Hunt, now chair of the Health and Social Care Committee, told MPs: "Yes this will cost the NHS money, but it will save the NHS even more money, because every additional nurse or doctor is an additional locum we don't need to employ.

"Because locums are more expensive and less good for patients, because t makes it harder for them to see the same doctor."

Royal College of Physicians data published last week revealed there has been a 33% increase in unfilled consultant posts across the UK since 2013.

"The amendment would have addressed this by encouraging a more strategic, long-term approach based on the regular publication of future workforce projections.

"Despite pledges, promises and manifesto commitments there is still no plan to address workforce shortages, and there is no certainty about the budgets for staff education and training.

"The health and care workforce crisis continues to be a blind spot for the Government."

Patricia Marquis added: “The amendments we backed were designed to ensure health and care services have the workforce they need to deliver safe high-quality services now and in the future.

"Thousands of nursing staff and supporters contacted their MPs this week, asking them to stand up for safe staffing and back changes to this bill.

“The current approach to workforce planning is haphazard and leads to shortages – running counter to all ambitions to improve patient safety.

“For the remainder of its time in Parliament, we and others will continue to push for amendments to the bill.

"The nursing profession will continue to speak out on the need for a sustainable and accountable workforce plan and highlight the impact of the current level of vacancies.”

Previous : No10 in chaos as Boris Johnson’s spokesman forced to insist ‘the PM is well’
Next : Myanmar troops arrest 18 medics for treating ‘terrorists’ in church