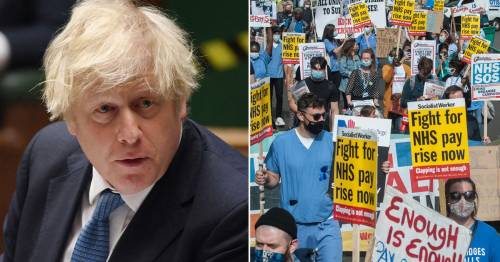 Nurses and junior doctors could lead a spate of strikes as NHS unions begin crunch talks on whether to accept a 3% pay rise.

Tory ministers belatedly announced the rise last night in a day of farce, boasting they’d increased a 1% planned hike and most other public workers’ pay will be frozen.

But Royal College of Nursing (RCN) has warned the ”bitter blow" will be a salary cut once inflation – currently 2.4% and tipped to rise – is taken into account.

The Government said the rise would exclude 61,000 “junior doctors” – who are all doctors below the level of consultant and make up 50% of this workforce.

And today it emerged nurses, along with most other working-age people, could in fact have to fund some of the rise from their own salaries.

According to The Times, Boris Johnson is still looking at a 1% National Insurance rise to pay for social care reforms – and could raid this to fund the NHS pay hike.

Business Secretary Kwasi Kwarteng refused to rule out the possibility today, telling Sky News: “Were going to pay for it through general taxation as we pay for everything.” 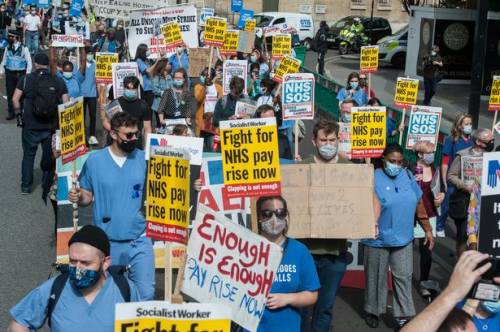 Unions had demanded a 15% pay rise to recognise years of austerity cuts and the work in Covid
(Image: Getty Images)

“But, you know, things have been very flexible over the last 18 months, we’ve lived through an unprecedented time. We’ve been spending huge amounts of money we never thought was possible."

The pay rise is for more than a million staff in England on Agenda for Change contracts, including nurses, healthcare assistants and porters. It also applies to doctors and dentists apart from those in training, who are already on multi-year deals.

The Department of Health and Social Care said the "average nurse" will receive an additional £1,000 a year, while many porters and cleaners will get around £540.

And Prime Minister Boris Johnson tweeted: "To recognise the extraordinary contribution they have made they are receiving a 3% pay rise this year."

The Mirror understands Unison, the largest NHS union, and the BMA, the main doctors union, will also consult members but are undecided whether to recommend industrial action.

Dr Jenny Vaughan, DAUK chair, said: “This 3% barely takes the edge off the erosion of doctors’ pay over two decades.

“This 'pay rise' will ultimately be a pay freeze. It is time to pay and we hope the British Medical Association, the Hospital Consultants and Specialists Association as well as allied health professional unions will join us in voicing our discontent, including taking industrial action.”

Do you think the pay rise is fair? Join the debate in the comments.

Patricia Marquis, England director of the RCN, told BBC Two's Newsnight the award left nurses feeling they were not "valued for what they do".

She told the programme the union would consult with its members, adding: "Once we have their view – which we suspect will be to say they are unhappy about the level – we will then be considering with them what the next steps might be, which could include consideration of industrial action most certainly."

The RCN has set aside £35 million to cover the costs of a potential strike and is training 25,000 members as workplace activists to help it ensure that at least half of members vote in any ballot, to comply with trade union laws brought in by the Tories.

The rules, to make it harder for unions to strike, require a minimum 50% turnout in any ballot and for at least 40% of the membership to approve any action.

The RCN’s members in Scotland have already rejected a 4% offer from the Scottish government.

"We asked the independent pay review bodies for their recommendations and I'm pleased to accept them in full, with a 3% pay rise for all staff in scope, from doctors and nurses to paramedics and porters."

The RCN had been campaigning for a 12.5% pay increase and its general secretary Pat Cullen said: "When the Treasury expects inflation to be 3.7%, ministers are knowingly cutting pay for an experienced nurse by over £200 in real-terms.

"Nursing staff will remain dignified in responding to what will be a bitter blow to many.

"But the profession will not take this lying down. We will be consulting our members on what action they would like to take next."