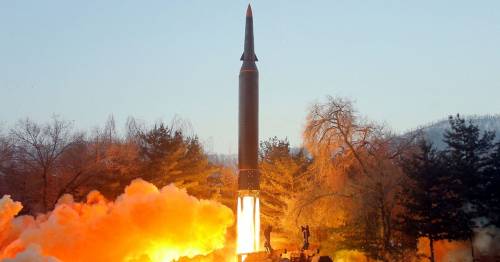 North Korea fired what appears to be the third missile this year just hours after attacking the United States push for new sanctions and calling it a provocation while promising a strong reaction.

An unidentified projectile was launched into the sea off North Korea's east coast on Friday, South Korea's military said.

Japan's coast guard has also confirmed that North Korea had launched what could be a ballistic missile and that it has fallen to earth.

The launch would be the third since New Year's day, an unusually high pace of missile tests. The previous two were of "hypersonic missiles," North Korean state media reported, capable of high speeds and manoeuvring after launch.

North Korea defended its missile tests as its legitimate right to self-defence and said the United States was intentionally escalating the situation by imposing new sanctions, state media reported earlier on Friday, citing the foreign ministry.

The country's recent development of a "new-type weapon" was just part of its efforts to modernise its national defence capability, and did not target any specific country or harm the security of neighbouring countries, the foreign ministry said in a statement on the KCNA state news agency.

North Korea fired what was thought to be a second ballistic missile within a week last Tuesday, after claiming that it had launched a "hypersonic missile" that successfully hit a target, the previous Wednesday.

UN Security Council resolutions ban all ballistic missile and nuclear tests by North Korea, and have imposed sanctions over the programmes.

North Korea has said it is open to talk, but only if the United States and others drop "hostile policies" such as sanctions and military drills.

Few observers expect Kim to ever fully surrender his nuclear arsenal. North Korea argues its missile tests and other military activities are for self-defence and are similar to those regularly undertaken by other nations.