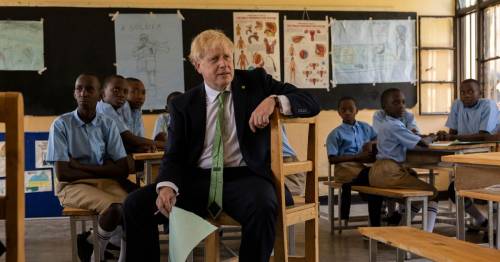 Boris Johnson tonight said he was ready to tell Prince Charles to “keep an open mind” about forcing asylum seekers to Rwanda.

The Prime Minister vowed to face down the future King – who is said to have called the plan “appalling” – as the pair take tea in one-on-one talks at 11am tomorrow at a Commonwealth summit.

Speaking this lunchtime in Rwanda’s capital Kigali, the Prime Minister said he was “of course” going to “make that point” to Prince Charles “critics need to keep an open mind about it”.

But hours later Downing Street hosed down the PM’s comments – suggesting he wouldn’t raise the policy at all.

Mr Johnson’s spokesman said it was “unlikely” the topic would come up – and it was understood Prince Charles did not plan to raise it either.

Boris Johnson and Prince Charles, pictured last year, are reportedly at odds over the PM's plan to send asylum seekers to Rwanda
(

While No10 did not rule out the PM raising the plan, Mr Johnson’s spokesman said the “relatively short” meeting was set to focus on three priorities – sustainability, climate change and girls’ education.

That was despite Boris Johnson saying earlier: “The critics need to keep an open mind about it, a lot of people can see its obvious merits. And yeah of course, if I’m seeing the prince tomorrow of course i'm going to make that point.”

No10 refused to deny if there were conversations between Downing Street and Clarence House officials about the PM’s remarks.

A Clarence House spokesman said: "As we have said previously, we will not be commenting on supposed remarks made in private except to say that the prince is politically neutral.

The pair will meet one-on-one with a few officials in the margins of the Commonwealth Heads of Government Meeting in Rwanda.

It came as the Rwandan government confirmed Britain has already sent its entire £120million downpayment for the five-year asylum seeker scheme to Rwanda – and “part of it” has already been spent.

Despite no migrants arriving yet, government spokesperson Yolande Makolo said the money “was intended to prepare all the accommodations and all the other institutions.”

She would not say if Rwanda will return the £120m if the policy gets blocked in the High Court, telling the Mirror: “I’m not going to speculate about that”.

But she did confirm no asylum seekers in Rwanda have been sent to Britain yet under a reciprocal deal.

That is despite the UK government saying last year it was concerned about "restrictions to civil and political rights and media freedom" in Rwanda, and "allegations of extrajudicial killings, deaths in custody, enforced disappearances and torture.”

Human Rights Watch has warned Rwanda is not “a safe third country to send asylum seekers to”.

But government spokesperson Ms Makolo hit back: “They’re not only outdated but they’re unwarranted accusations.

“There’s nothing wrong with human rights in Rwanda. Human rights are a work in progress in every country.”

Boris Johnson today visited the Kigali Genocide Memorial. He paused at the flame of remembrance marking 28 years since Hutu extremists killed around 800,000 Tutsi and moderate Hutus.

He wrote in the visitor book: “It has been utterly shocking to see these images, and so many physical memorials, of the appalling and inexplicable genocide against the Tutsis.

"We must do everything we can to ensure that human hearts never again are allowed to breed such hatred.”

Previous : Jake Paul will put $300,000 belt on the line against rival Tommy Fury
Next : Jake Paul claims “bum” John Fury is living through his sons after failed career