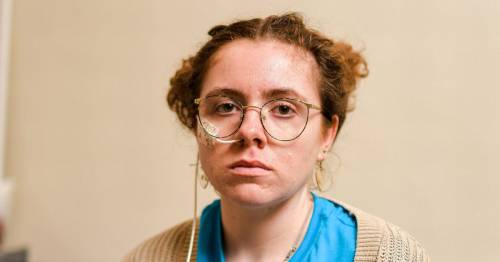 A young NHS worker has been unable to eat food for seven years after being struck down with a rare stomach condition.

Lauren Blake, 22, suffers from Gastroparesis, a condition which prevents her stomach from digesting food and drink and causes her to vomit "at least ten times a day''.

The call handler has had to use feeding tubes since the age of 15 but is now she is on a mission to fundraise enough money for life-changing surgery which could allow her to eat normally again.

Miss Blake, from Southampton, Hants, has to raise £18,000 to have a gastric pacemaker fitted in her stomach as the operation is not funded by the NHS.

She said: "Gastroparesis has taken away the social side of my life. It all started when I was 15 and it hasn't been easy, it took a while for me to be diagnosed.

"I was so ill for about three months before I went to hospital, I wasn't keeping anything down, I was on feeding tubes.

"I spent four months in hospital and we had gone through every test possible. it was a bit of a shock but it was nice to get a diagnosis."

Miss Blake, who lives with her parents, is on multiple different medications, is still reliant on feeding tubes and suffers from pain and sickness.

Anything she eats remains in her stomach but does not get absorbed and can sit there for more than twelve hours.

She added: "I am sick at least ten times a day. On my worst days, I can't even keep down my own saliva. It's constant, like having a stomach bug but all the time.

"It's affected everything. I was admitted to hospital at 15 when I was in my first year of college and they ended up removing me from their record because I couldn't attend or keep up. I've lost several jobs because of this."

After spending years on a variety of medications, Miss Blake is now determined to raise the money required to fund the surgery for her gastric pacemaker.

"It's basically exactly the same as a heart pacemaker," she said.

"It's placed onto my stomach and gets the muscles to contract so my stomach can absorb food. It will give me the chance to actually eat and drink normally."

Miss Blake recently visited a specialist doctor in Leeds to find out more and said she qualifies for the surgery.

The health worker has now begun fundraising and her efforts include climbing Mount Snowden last year and riding the world's fastest zip wire.

But she often has to use a wheelchair due to her other condition and how tired she gets from not eating.

"I have Ehlers-Danlos Syndrome that causes me to have about 80 joint dislocations a day. My doctors think this is what caused my Gastroparesis," she said.

The NHS worker said the treatment would be life changing
(

Miss Blake said the gastric pacemaker would "give me my life back".

She added: "It's been nearly seven years since I was able to keep a meal down. It has been difficult.

"I'm always worrying about where the nearest bathroom is or if I'm at work and my colleagues are eating their lunch and question why I'm not eating anything.

"Raising £18,000 would be life-changing. It would give me my life back and change absolutely everything for me."

She has launched a GoFundMe to help her raise money for the operation she needs.