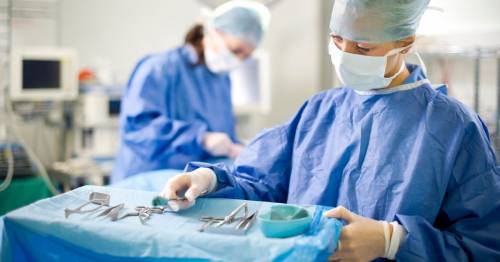 The NHS treatment backlog has hit a record 5.7 million with almost 10,000 waiting more than two years.

The health service is under unprecedented pressure as a record 5,025 people had to wait more than 12 hours at A&Es in England last month.

A record 104,875 people waited at more than four hours from the decision to admit to actually being admitted on to wards.

A total of 9,754 people were waiting more than two years to start routine hospital treatment at the end of August 2021.

This is up from 7,980 at the end of July and more than three times the 2,722 people who had been waiting this long in April.

The health service is under unprecedented pressure as a record 5,025 people had to wait more than 12 hours at A&Es in England last month
(

NHS England has told hospitals to eliminate all waits of more than two years by March 2022.

Hip and knee replacements are in the category worst affected by delays, often now considered serious or life-altering enough to be front of the queue.

Tracey Loftis, policy head at Versus Arthritis said: “People with arthritis’ lives are being destroyed as they languish on waiting lists.

“Those who desperately wait to receive treatment are paying the price both physically and financially, with many being left in agonising pain, unable to work or leave their homes.

“A total hip replacement is one of the most effective treatments on offer to improve someone’s quality of life and mobility.

“We have an operation that works brilliantly and yet people with arthritis face the uncertainty of long waits to access them.

“We need to see the Government tackle the surgery backlog and that means protected funding to bring down the numbers waiting for joint replacements.”

Almost 10,000 people have been waiting for two years
(

A&E waits of 12 hours from a decision to admit to actually being admitted topped 5,000 for the first time.

Real waiting times are usually much longer that the statistics imply as many patients wait hours to be seen after arriving.

The figure is up from 2,794 in August, and is the highest for any calendar month since records began in August 2010.

Dr Tim Cooksley, president of the Society for Acute Medicine, said: “This data presents a worrying picture as we are moving further away from an NHS that can provide the best possible care to all who need it promptly and closer to one which can only focus on those most critically unwell.

“Even then it is with a threadbare workforce that has been run into the ground and there is widespread concern about winter given the NHS was in a weak position heading into the pandemic and is now rebuilding on the back foot.

“There is no doubt this raises safety concerns and, sadly, many people will be waiting longer for their care and it will not be delivered to the standards they should expect as services struggle to contend with workload.”

There are also fears many people are going without a diagnosis for serious and life threatening conditions.

A total of 369,086 patients were waiting for one of 15 key diagnostic tests in August, including an MRI scan, non-obstetric ultrasound or gastroscopy.

NHS England figures show 210,931 urgent cancer referrals were made by GPs in England in August, up 24% from the 170,036 reported in August last year.

Urgent referrals where breast cancer symptoms were present – though not initially suspected – were up from 9,486 in August last year to 11,179 in August 2021

Ambulances responded to a record 76,000 life threatening call-outs, an increase of more than 20,000 on the previous high for September, while 999 took nearly one million calls in September.

NHS 111 also saw record demand taking a call every 7 seconds and over 1.9 million calls in total across August.

Professor Stephen Powis, NHS national medical director said: “There is no doubt the NHS is running hot, with the highest ever number of patients seen in A&E in September, 14-times as many Covid patients in hospital compared to the same month last year and record 999 ambulance calls.

“But despite the busiest September on record, NHS staff have moved heaven and earth to make the best possible use of additional investment delivering millions more tests, checks, treatments and operations.

“That is why it is really important people do not delay seeking help from the NHS if they feel unwell.

“Anyone needing help should come forward through 111 online so that staff can help you with the best option for your care, and it remains as important as ever to get your lifesaving Covid jab, and with winter approaching, to get your flu jab too.”

Michaela Anaka, 54 from south east London lives with osteoarthritis and rheumatoid arthritis and is waiting for a knee replacement.

She said: “I was in so much pain that even moving the bed covers back was painful.

“I couldn’t kneel down, do housework, or get in the shower, and my husband needed to help me do everyday tasks. Things had to change.”

Michaela has been forced to use her life savings to pay to have the operation done privately.

She added: “Waiting for all the time I did for surgery has caused damage that will never be repaired. It’s incredibly distressing to live with.

“Mentally, there are dark days where I feel I can not go on. Every day things that people take for granted I struggle to do, from dressing to cooking.

“Physically the pain and lack of movement has changed how I view myself, I can’t put on a proper bra, I keep my hair short, putting on makeup is incredibly difficult – it all chips away at your sense of self.

“I have needed to take early retirement due to arthritis, its impact on my life can’t ever be underestimated.”

Previous : Next warns of Christmas delivery delays due to ‘pressure’ in UK warehouses
Next : Man’s message in a bottle comes back to him 24 years after throwing it in ocean