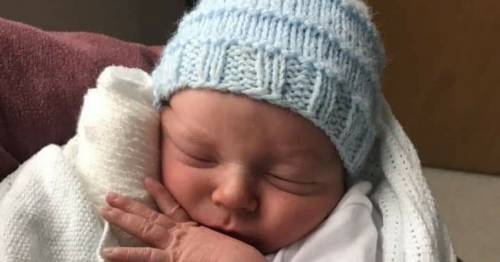 A newborn baby boy was savaged to death by a family dog after his mum fell asleep on the sofa and his dad went outside for a cigarette.

Reuben McNulty was just 14 days old when his parents' pet Staffordshire Bull Terrier bit his head up to 23 times, resulting in his death three weeks later.

Parents Amy Litchfield and Dan McNulty had been previously warned by social workers not to leave Reuben unsupervised and alone with their two Staffies.

But Amy, 31, was in a deep slumber next to Reuben, who also slept in a teddy bear bed on the sofa, and Dan had gone outside for a cigarette when the tot was savaged by one of the dogs at the family home in Yaxley, Cambs.

An inquest today heard that neither Reuben nor the dogs were being directly supervised at the time of the attack just before 2am on November 18, 2018.

Tiny Reuben was mauled by one of the dogs
(

Neither of the child's parents attended the hearing today.

The coroner heard that Dan returned inside to find Reuben and the white dog – called Dottie and aged around 6 – covered in blood, while Amy was still asleep.

Dan immediately called 999, telling the operator: "I think the f****** dog's attacked him. My partner was asleep, I just heard crying.

When paramedics arrived, Daniel and Amy refused to hold Reuben, the inquest heard.

The baby was airlifted to Addenbrooke's Hospital in Cambridge where he was found to have suffered severe brain, spinal and skull injuries.

Reuben died at the same hospital on December 13 – three days after life support was removed.

Simon Newbury, a veterinary forensics expert, said that the dog may have bitten Reuben up to 23 times in the head while shaking him around.

Mr Newbury told the inquest at Peterborough Town Hall: "It's possible that Dottie saw Reuben as a small prey or a squeaky toy.

"It's possible that Dottie was stimulated into a predatory drive by crying or a movement [by Reuben].

"There appears to have been no supervision of the dogs. Amy was in a deep sleep, Daniel was downstairs smoking."

Dan and Amy were both arrested by police on suspicion of child neglect after the incident but prosecutors decided not to charge them in December 2020.

A child protection plan was issued by social services before Reuben's birth stating that he should never be left alone with Dottie and the other dog, a nine-year-old Staffy called Fizz.

Amy had owned the dogs since their birth and there were no past reports of violence or aggression from them.

Both dogs were seized by police and put down after the incident.

Coroner Simon Milburn concluded the inquest: "[The child protection plan] gives clear indication and evidence that the parents were aware Reuben should not be left alone with the dogs at any time, nor when the family were eating.

"Neither Reuben nor the dogs were being directly supervised during the time of the attack."

Mr Milburn added: "In the early hours the explanation was that the mother was asleep in the living room – she had taken sleep tablets.

"Dan said he went out for a cigarette and Amy recalled in her [police] interview that Dan told her but unfortunately she fell back asleep, and it was when Dan came back inside a short time later he found Reuben seriously injured and one of the dogs, Dottie, covered in Reuben's blood."

Mr Milburn described the incident as an "unintentional short period of inattention which sadly had horrific and tragic consequences".

He noted that the dogs had been separated from Reuben on previous visits by social services and midwives, including on November 12 – six days before the incident.

Speaking after the inquest today, Reuben's nan Ruth Hinchey spoke of her relief at finding a conclusion to the family's ordeal.

Ruth, Amy's mother, said: "We're just glad it's finished and we can properly move on."