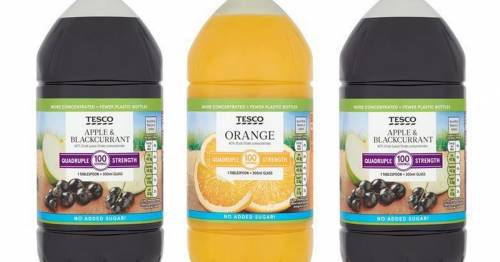 Tesco’s new quadruple-strength fruit squash is so strong parents have said it is burning their kids’ skin and one person even called it “radioactive”.

The supermarket put the new cordial on its shelves last month with 12 flavours which replaced the previous double-strength drink.

It was sold by Tesco as a stronger drink in a smaller bottle with the aim of cutting plastic and just needed to be more diluted.

And the new quadruple strength squash is not just better for the planet, but also the pocket.

When diluted in line with on-pack guidelines, each serving costs just 1.8p, compared to the 2p per serving cost of a classic bottle of double strength.

Parents have said that the new drink "burns" their kids
(

But many people have not been happy with the new squash option and claimed that its quadruple-strength is causing skin irritations.

“My nephew couldn’t drink the stuff as his mouth started tingling. It’s radioactive to say the least,” wrote Melissa Kent.

There were other similar comments with one mum saying: “Has anyone else been burned by the Tesco quadruple strength squash?”

And Sheila Howell says she was told to seek medical help after her three-year-old grandson got undiluted cordial on his skin.

She claimed: “His skin went bright red and took over an hour to go down. He was in some discomfort. It makes me wonder what happens to your insides when you drink this.”

One shopper even said the squash is "radioactive"

But Tesco have said that have said there is nothing unusually strong about the new cordial and that there is "nothing to suggest" the new stronger variety could cause any harm.

Tesco, reported The Sun, said: “When diluted correctly, our quadruple strength squash is the same strength as our other squash products.

“If it is consumed undiluted or incorrectly diluted, it will be stronger. However there is nothing to suggest this could cause any harm. The dilution instructions are clearly visible on the label.”

Previous : Private equity firm TPG valued at over $10 bln in strong market debut
Next : Why Rafael Nadal is set for possible heartache if Novak Djokovic is kicked out of Australian Open