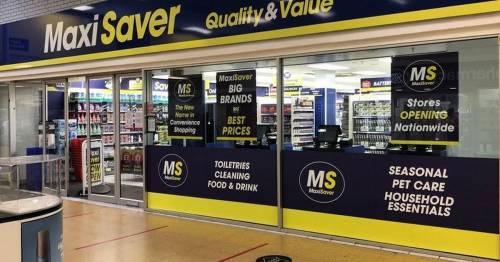 A new discount store chain that only opened its first shop last year has announced plans to open 20 more outlets, creating 200 jobs in the process.

Since then, it has gone on to open another seven shops in Erdington, Stourbridge, Melton Mowbray, Chesterfield, Mansfield, Dudley and Newark – taking its total store count to eight.

MaxiSaver has now announced plans to continue this expansion and says it is actively searching for new premises with between 2500-6000sq ft of space in towns and cities.

Retail Gazette reports that the discounter is looking to open shops in towns and cities including Bedford and Sheffield.

Inside of one MaxiSaver store

The discounter promises big brands at the best prices

The expansion would create at least 200 new jobs, as well as adding roles to the MaxiSaver head office team.

MaxiSaver – whose slogan is “big brands, best prices” – sells around 6,000 products that range in price from 29p to £59.99 and includes food and drink, household, cleaning, pet, garden, stationery, leisure, seasonal, health and beauty.

In comparison, Poundstretcher prices fall anywhere between 15p and £90 and its slogan is “every penny counts”.

Managing director Paul Mathers, who has more than 25 years’ experience in the retail sector including senior positions at Poundstretcher, said he had felt there was a gap in the market for a convenience style retailer offering quality, branded goods at good prices.

He said: “As soon as we opened our first store last August, it became an immediate hit which gave us the confidence to roll-out further stores and in every location.

“We are now expanding outside the Midlands and we’re currently searching for retail property that is close to both transport links and other retailers, which will give us good coverage on high streets and in city centres across a large part of England by the end of 2021.”

On its website, MaxiSaver describes itself as a "new name in convenience shopping" with "well branded stock at affordable prices".

But MaxiSaver isn't the only new retailer with plans to expand across the UK.

Last month, we reported on how a new supermarket that's been dubbed the Russian version of Lidl is opening its first store this year.

Svetofor, which was founded in Siberia in 2009 but trades under Mere in Europe, says it costs up to 30% less than other budget shops like Aldi.

The Russian chain has 3,200 stores internationally and opened its first European Mere store in 2018.

Previous : Tesco to give all shop floor and distribution staff a pay rise to £9.55 an hour
Next : You can buy your very own beach near Dover for £1 – but it’s not for the faint-hearted