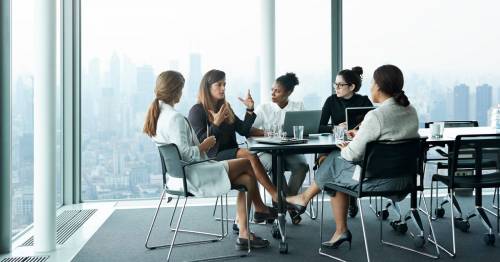 New mums take five months to settle back into workplace after having baby, study finds

It takes five months for new mums to settle back into the workplace after having a baby, a study has found.

A poll of 1,000 working mothers who have had a child in the past five years found a fifth dreaded the idea of having to go back to work over fears they had 'forgotten what to do'.

While 23 per cent worried about the changes that had happened within their job role or company during their maternity leave.

Others had worries about the childcare juggling act and having to leave their child with someone else.

But even when they did get back to the workplace, it took the average mum more than six months to get used to the commute.

Mums said it took months to get used to the commute
(

As many as four in 10 also felt they had to 'prove' themselves to their colleagues and bosses, with 34 per cent worried they were no longer good enough.

Despite this, 55 per cent said their company made them feel welcome upon their return and 53 per cent felt their change in priorities were acknowledged and accepted.

The findings come as Maltesers launches a new social media campaign, #TheMaternityReturn, looking at the importance of support when returning to the workplace after maternity leave.

Leah Dyckes, from Maltesers, said: “There is no single experience for women going back to work after becoming a new mum.

“While many women relish the return to work and welcome the variety it brings to new family life, it can also be overwhelming and a real struggle to make it work.

"For some, the result can even be worsening mental health.”

The study also found nearly four in 10 felt nervous before going back to work while a third were overwhelmed and self-conscious.

For 48 per cent, the length of time it took them to settle back in came as a surprise as it was longer than expected.

Despite a quarter of mums feeling organised and a further quarter happy, the top emotions of working mums when returning to their day job were found to be tired (30 per cent), overwhelmed (28 per cent) and guilty (26 per cent).

The study, conducted by OnePoll, also revealed 72 per cent stayed in touch with office peers while on maternity leave, with 76 per cent believing this helped them settle back in quicker.

Earning money (50 per cent), being able to go to the toilet in peace (35 per cent) and seeing colleagues again (34 per cent) were the top things mums most looked forward to about going back to work.

Of those with more than one child, 71 per cent felt it was more difficult going back the first time round because it was something they hadn’t experienced before.

And 51 per cent admitted they waited longer than expected to have another child due to their previous experience of returning to their job.

Leah Dyckes added: “ Our #TheMaternityReturn campaign will aim to give a platform to working mums to share the ups, the downs, the difficulties, and challenges of returning to work.

"This is alongside urging the colleagues, friends and family of mothers to do what they can do to support the mums in their lives as they return to work – all because we know that it’s one mother of a job.”

TOP 20 WORRIES MUMS’ HAVE WHEN RETURNING BACK TO WORK

Previous : Boxing legend Manny Pacquiao fails in attempt to become Philippines president
Next : Brits want a manager they can talk to about their personal life