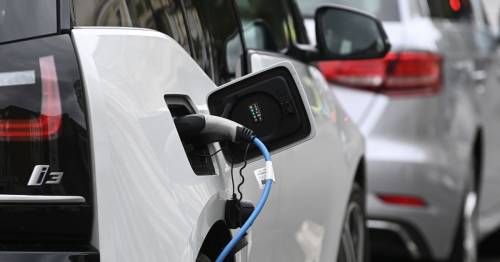 New homes and buildings like supermarkets and offices will be forced to install electric vehicle charge points from next year under plans to get Britain ready for electric cars.

Regulations will be updated so that the buildings, including those undergoing major refurbishment, will be ready to to cope with the wider roll-out of green vehicles.

Boris Johnson announced the change to business chiefs today, claiming up to 145,000 extra charge points will be installed across England each year as a result.

But Downing Street admitted it will only apply to developments with more than 10 parking spaces and there will be other "exemptions" too.

The PM's spokesman said: “When the policy’s set out, it will be for new dwellings, including flats with associated parking within the boundary. It will be for new residential properties with more than 10 parking spaces.

“There will be some exemptions set out – there’s a full list of where it applies which will be in the document published.”

Buildings undergoing large scale renovations which leaves them with over 10 parking spaces will also be required to install electric vehicle charge points.

The sale of new petrol and diesel cars will be banned in the UK from 2030.

Mr Johnson told the CBI conference “we are on the brink of another revolution, a green industrial revolution”.

He recalled trying out a Tesla car, while writing about motoring for GQ magazine, that “expired in the fast lane of the M40”.

He also claimed during his childhood, none of the UK’s grid was powered by wind – saying: “It seemed faddish and ludicrous to imagine we could light and heat our homes with a technology that dated from 9th Century Persia.”

But he claimed technology had improved and “the pace of change is now going to accelerate like a new Tesla”, adding: “The tipping point has come, hasn’t it?

“EVs may not burble like sucking doves and they not have that broom broom brah brah that you like, but they have so much torque that they move off the lights faster than a Ferrari.”

No10 said the government will lay regulations in Parliament by the end of this year, followed by “an adjustment period of no less than 6 months” before they come into force.

Labour said London and the South East have more public car charging points than the rest of England and Wales combined.

Yet the PM’s plan had no plan to “level up” the difference, nor any help for lower and middle income families to actually buy electric cars.

“ Rather than step up to support the car industry in the global race for green technologies, Ministers have stepped back and left manufacturers, workers and the public on their own, failing to take the action necessary to make the switch affordable for families hit by a cost of living crisis.”

In a rambling speech in South Shields, Mr Johnson lost his place for more than 20 seconds, rifling through his notes while saying "forgive me".

And he bizarrely went on a lengthy diversion about Peppa Pig World, revealing he went yesterday and asking why business leaders in South Shields had not attended the attraction in Hampshire.

He said: "Yesterday I went, as we all must, to Peppa Pig World.

"I loved it and Peppa Pig World is very much my kind of place. It has very safe streets, err… discipline in schools, heavy emphasis on new mass transit systems, even if they’re a bit stereotypical about Daddy Pig."

He also boasted: "Last week we announced three vast new high speed lines, cutting the time from London to Manchester by an hour and creating a new Crossrail of the North."

He said: "There are also sound evolutionary reasons why Mother Nature does not like working from home, so I prophesise people will come back.

It comes as Keir Starmer will today build bridges with the business community as he promises tighter finances instead of "wasting" firms' money.

The Labour leader will promise to "chase down every penny we spend" if he makes it into power with a new Office for Value For Money.

The party is attempting to rebuild its reputation for economic credibility by insisting it will be a "stable government and tight ship" in contrast to the Tories.

"Just as every one of you scrutinises the cost side of your business, constantly asking yourself if investments are paying off, we will do the same on behalf of the tax-paying public."

The Labour leader will set out more detail on his commitment to "make Brexit work" – ruling out refighting the Brexit wars to take the UK back into the European Union.

"It is obvious that a poorly thought-through Brexit is holding Britain back. We all have a duty to make Brexit work," he will say.

The CBI’s director-general Tony Danker said the organisation was behind the government’s levelling up agenda.

He said the CBI would create a “centre for thriving regions” which would co-ordinate the private sector effort. He added: “Simply saying the market will fix this is not good enough.”

He said the UK risked becoming a “branch line economy” where head offices were too often based in London with "the branch managers and the back-office based everywhere else".

He said: "The truth is that the UK suffered from de-industrialisation.

"Since the 1980s, we let old industries die – offering little more than benign neglect for what got left behind – it was an economic policy that was ambivalent about levelling down.

"Too relaxed about a brain drain as young people leave home to chase better paid jobs."