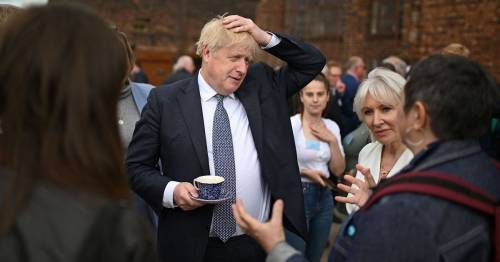 Extra help for the cost of living crisis could take until AUGUST to deliver, Downing Street hinted today.

No10 said no new help was coming soon despite Boris Johnson promising to assist first in “days”, then “months”.

This morning the Prime Minister appeared to hint there’d be help in two months, saying “there is more coming down the track – July and so on”.

But Mr Johnson’s spokesman clarified he was talking about an already-announced change to National Insurance thresholds which begins on July 6.

It appears the PM is gearing any new announcement to August – when Ofgem is expected to unveil another hike in energy bills to start on October 1.

Mr Johnson’s spokesman confirmed “August and later in the year is around the time there may be more certainty” and “we may have more to say at that point”.

Though he added: “I simply can’t be definitive at this stage”.

It means families face three months without any extra help that hasn’t already been announced – despite an urgent Cabinet ‘away day’ on the crisis.

Ministers are meeting this lunchtime in Stoke-on-Trent, Staffordshire, to thrash out potential help for struggling households.

Shadow Levelling-Up Secretary Lisa Nandy said: "There's lots of ways in which the Government can help now and can help to preserve and build resilience in the economy, and in family budgets, for the future.

“But that's why we have been calling for an emergency Budget, but so far we've had absolutely nothing from this Government, and it beggars belief at a time when people are struggling."

Boris Johnson drinks from a cup as he talks with local business leaders after hosting a Cabinet away day, at a pottery in Stoke-on-Trent
(

But energy bills have already risen by £693 a year on April 1, with another rise expected in October.

On Tuesday Mr Johnson told MPs he would be "saying more" about households' shrinking budgets "in the days to come".

But after aides and Michael Gove furiously denied there would be an emergency budget, he clarified: ‘Of course there will be more support in the months ahead”.

No10 insisted that along with a £150 council tax rebate in April and the NICs change in July, there is a repayable £200 energy bills discount in October.

The Warm Home Discount will also be extended to more people and raised from £140 to £150 this coming winter.

Asked when there’d be a new announcement No10 said: “We haven’t made any decisions. We’ve got further help being phased in.”

Asked if it’d be August, when Ofgem announce the price cap, he added: “I’m not going to get into any speculation because no decisions have been made.

“The Chancellor has made the point that August, later in the year, is around the time when there may be more certainty about some of the impacts about this energy volatility we might see.

“We may have more to say at that point but I simply can’t be definitive at this stage."

"I do think that the Government should consider properly a windfall tax,” he said.

"Oil companies or oil bosses are the new oligarchs – one of them earning a salary over £76million, getting a £4.5m bonus."

While refusing to rule out such a levy, the Prime Minister insisted: "The disadvantage with those sorts of taxes is that they deter investment in the very things that they need to be investing in – new technology, in new energy supply. I don't like them.

The PM’s spokesman said of a windfall tax – proposed by Labour – “we do not think this is the right approach.”

But he added: “We do keep options on the table, rightly so. That’s the right approach given the challenges we’re seeing.”

The spokesman refused to be drawn on a timescale if oil fat cats failed to invest their bumper profits.