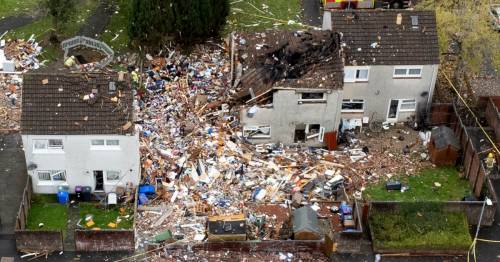 Neighbours of a home rocked by a huge explosion that left a family-of-four seriously injured claim there was a ‘strong smell of gas’ in the hours before.

Gary Burges said he noticed the worrying odour in the air on Monday morning as he went to collect his morning paper in Ayr.

The 45-year-old, who lives near Gorse Park, thought a lorry had hit his house when he heard the huge blast shortly after 7pm that same day, the Daily Record reports.

Several locals claimed to have reported the smell to Scottish Gas Networks but the distributor has denied that their engineers were called out before the incident.

Investigations were ongoing into the cause of the blast
(

A family-of four, named locally as William and Marion Ferguson along with their two boys, aged 11 and 16, remain in hospital in a serious condition.

They were pulled from the rubble by members of the public and the emergency services who raced to the scene.

Resident Gary said: “The smell of gas on Monday was so strong when I went for my morning paper.

“People were talking about it and you’re always thinking at the back of your mind there could be an explosion.

“When the blast happened I was sure that a lorry had driven into the side of my house, which is 100 yards down the road from Gorse Park.

Four people were taken to hospital
(

“I heard people say that several complaints had been made to the suppliers so I’d be very interested to see what they have to say about that.“

He added: “All I can say right now is that I hope those involved in the blast get through it. But there needs to be an inquiry to get to the bottom of how it happened.”

Nine fire appliances attended the scene as terrified neighbours in nearby properties were evacuated to safety.

Police and fire crews remained on the scene this morning as a huge clean-up operation got under way, with residents working tirelessly to remove wreckage and debris from their streets, homes and cars.

Dramatic aerial pictures showed the aftermath of the explosion.

One local said: “It sounded like a bomb had gone off or there had been a plane crash. That’s the only way I can describe it.

“Things were flying through the air, it was surreal.”

Scottish Fire and Rescue Service area commander Ian McMeekin said: “Our thoughts are very much with all those who have been affected by this incident.

“This is an extremely challenging and complex incident and at its height we had nine appliances in attendance.

“There is significant damage to the properties and surrounding area.

Four buildings were affected in the aftermath
(

“There’s been a number of properties affected; some where we have severe structural damage and some other properties have been affected by the blast.

“We now have two appliances in attendance and we are working with our partners to ensure the area maintains its safety.

“We’ll be working alongside Police Scotland and partners to establish the facts of the circumstances.

“I’d like to take the opportunity to thank the community for their support and understanding during this time.”

Gas supplier SGN has said it’s too early to determine what caused the huge explosion and added that, “engineers are continuing to work with the emergency services to ensure the immediate vicinity is made safe in our role as the gas emergency service.”

The community banded together to help those in need, opening up places of shelter including Queen Margaret Academy, the town’s Mercure Hotel, Kincaidston Community Pavilion and Ayr St Columba Church.

No cause has yet been determined by investigators
(

Kind-hearted residents dropped off blankets, food and bottled water for those affected while the community pavilion fed fire crews who worked tirelessly throughout.

It is not known how long residents who have been evacuated will remain out of their homes for.

A statement from South Ayrshire Council said: “At the moment, the council is working with emergency services to determine who will be able to return to their house and who will not due to ongoing building safety concerns.

“Our aim is to get people back home as soon as possible but we can only do this once we are confident properties are safe.

“Once we know who may still require accommodation, our housing teams will work with residents to support them.

“Council staff are at the Mercure Hotel working with those accommodated there. Anyone else affected can contact the council at 0300 123 0900.”

Previous : Giannis Antetokounmpo on Milwaukee Bucks’ title banner: ‘That’s going to be forever’
Next : Boyfriend of influencer killed in horror tunnel crash is ‘fighting for his life’